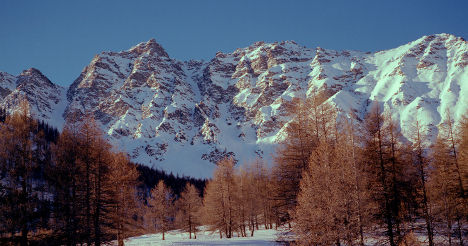 File photo of Queyras, in Hautes-Alpes, where two skiers were killed in an avalanche on March 9th, after going 'off-piste.' Photo: Nicolas Vigier

Police have taken the step of calling for "prudence" after the latest in a series of tragic accidents to hit the French Alps in recent days, saw two skiers killed in an avalanche in the Queyras range of the Hautes-Alps.

The two were in a party of three who were swept away when a slab of snow broke off as they were skiing off-piste at an altitude of 2,800m. The man, aged 75 and a woman in her fifties were found by rescuers 600metres further down the slope, but could not be revived. A third man, believed to be the woman's partner, survived the avalanche.

Like others who have been killed in the Alps in the last week, the two victims were experienced off-piste skiers and mountaineers. Their deaths at the end of a tragic week in the Alps, which saw a total of ten deaths including eight in avalanches.

The recent string of avalanches has been blamed on strong winds at high altitudes, in combination with a return to milder temperatures after heavy snowfall, which risks loosening up snow ridges.

However, the spike in deaths last week has also been attributed to the increasing popularity of “going off-piste”, whereby skiers venture beyond groomed, monitored slopes in search of a more isolated and thrilling experience.

Jean-Pierre Mirabail, deputy commander of the national police’s high mountain division, in Grenoble told French daily Le Figaro on Sunday that constant watchfulness was crucial for all skiers. “There’s no such thing as ‘zero risk’ either off-piste or on".

"You have to take into account how steep a slope is. You could have no problem skiing on a gentle decline, even if the avalanche risk is 4 out of 5. But you could get caught out on a steep slope, even with a low avalanche risk, level 1 or 2" said Mirabail.

The risk of avalanches remain high in parts of the Alps this week.

Mirabail also criticised the media for cultivating an image among young people of skiing being ‘fun and acrobatic’, which was encouraging more and more of them to go off-piste in search of thrills.

In a separate incident on Saturday, a 40-year-old ski and mountain skills instructor for France’s national police died after falling into a crevasse during a training exercise on Mont Blanc.

On Friday, a skier at Crévoux in Hautes-Alpes died in a freak accident, after colliding with a 30cm tree stump which severed the femoral artery.

Four skiers were killed in an avalanche on the ‘Passage to Hell’ section of mountain at Crévoux in Hautes-Alpes on Tuesday, while two were carried off to their deaths by an ice-slide at Tignes on Wednesday.

"If anything goes wrong, you'll have to know exactly where you are."

Sébastien Charles, owner of the A-Peak ski school in Montgenèvre, Hautes-Alpes, told The Local on Monday that anyone considering skiing off-piste, should always consult the slope's piste-rescue service first, checking what the avalanche risk is in the area that day, and informing the rescue service exactly where they intend to go.

"They will inevitably tell you not to do it, though," said Charles. "In that case, you should consult the local ski school for advice." Anyone still insisting on going off the beaten path, without the presence of a professional, should at least stick to 'obvious' off-piste areas, said Charles.

"If anything does go wrong, and you need to call the rescue services, you will have to be able to tell them exactly where you are, and being close to chair lifts and other markers will make it easier for them to find you and save you," said Charles.

Even off-piste, signposts and coloured flags are dotted around the landscape, warning skiers about the risk of avalanches, according to Charles.