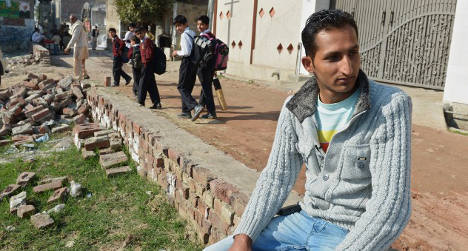 Three months ago he was strolling down Paris's elegant boulevards in his designer trainers and trendy jeans like any young man about town with his friends.

Now the 23-year-old spends his days killing time among the dusty concrete streets of Lala Musa, a small town planted in the vast farmlands of the Punjab.

Like tens of thousands of Pakistanis who hoped to build a better life in Europe, Ahmed's dream appears to be over. In all, more than 32,000 Pakistanis were ordered to leave the European Union in 2011, 1,545 from France and 6,430 from Britain.

After so long in France, Ahmed says he feels like an alien in his native land and he has only one printable word for what has happened to him: "catastrophe".

He arrived in France in 2006, aged 15, after his father, a farm labourer in Punjab, put him on a plane with a people smuggler and a fake passport.

"A land dispute with a neighbour was getting out of hand. I was the only son and he was afraid I would be killed," Ahmed told AFP in excellent French.

On his arrival in France, he was taken into the care of the state and began a course to train as a plumber. Social services described him as "a student with a good chance of succeeding" and had "no problem with behaviour".

Ahmed did not finish his course, because of health problems, he said, but his tutors said he had reached the required standard and had a good chance of finding a job.

An employer offered Ahmed a job on condition that he obtained a work permit, but a year went by with no progress on the paperwork from the authorities and the vacancy went to someone else.

On November 21 he was arrested on the Paris metro and sent to an immigration detention centre. At Christmas another shock came as his name appeared on the list of upcoming deportations.

"Up to that point I still thought I would have papers, that I would get married one day in France and start a family," he said.

The police came to get him in the detention centre on New Year's Eve.

On his arrival in Karachi, he was thrown in prison, the usual treatment for deportees, and there he discovered Pakistan's dark side: violence, extortion and corruption.

"The police, the warders and the inmates said to me, 'You're French, you've got money, give us money or else.' They came in threes to beat me up. It was the worst place I'd ever been," he said.

The French immigrants' rights campaign group the Network for Education Without Borders (RESF) managed to get Ahmed released after a month for €400, with the help of a Pakistani friend who sent him to stay with his brother in Lala Musa.

RESF criticised Ahmed's deportation as "absurd" and urged the French government to give Ahmed a French visa as a matter of urgency.

His case has been picked up by around 50 left-wing lawmakers, who have denounced the "dogged pursuit" of Ahmed in a letter.

He is one of a record 36,822 illegal immigrants thrown out of France in 2012. Interior minister Manuel Valls' office stressed the rules had been followed, pointing out that Ahmed was "neither an orphan nor a graduate".

"We're punishing Ahmed for not being an orphan!" said Richard Moyon of RESF.

"France took charge of Ahmed, he learned French very well and has a trade. Just when he has everything he needs to become part of society, we throw him out.

According to an expert on the sector, France spent at least €175,000 ($230,000) to look after and train Ahmed. Plumbing looked like a good option, as France is short of qualified plumbers.

In France, Ahmed would have earned at least €70 ($90) a day as a plumber, but as he cannot read or write Urdu, the only work he can get in Pakistan is labouring for around 200 rupees a day ($2).

He has not contacted his family in Pakistan and is frightened to do so, worrying that the conflict that drove him away may not yet be over.

His one ambition is to get back to France and work. Now he is waiting for a new passport and has also applied for a French visa.

"I began my life at 15 in France, I became French in my mind and I don't feel Pakistani any more, my mind is too different," he said.

"Every night I dream I'm going back to France."