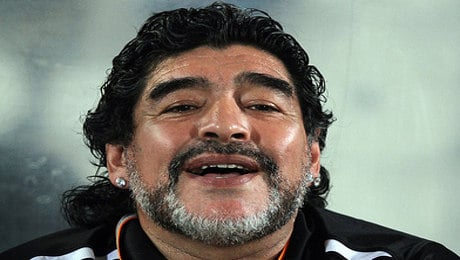 Outspoken Montpellier president Louis Nicollin said on Friday that he hopes to speak to Argentine legend Diego Maradona about taking over as coach at the club next season.

The French side, who won the Ligue 1 title last season for the first time in their history, are on the lookout for somebody to replace Rene Girard, who has been in charge since 2009 but will leave in the summer when his contract expires.

Nicollin, who often courts attention with his outrageous comments, made headlines on Monday when he told RMC radio that he was keen to recruit Maradona "to annoy PSG."

This time, however, it appears that his interest is genuine.

There have been suggestions that Maradona is keen to speak to the southern French outfit, and Nicollin insisted at the start of the week that "Maradona has been thinking about coaching in Europe and maybe at our club. If he wants to talk to us then we'll receive him with great pleasure."

However, Nicollin admits the situation has been complicated by the number of "agents" claiming to work on the Argentine's behalf.

"Things should become clear on Monday. I think that he (Maradona) will come to Montpellier with his agent for a first meeting, but it is not yet 100 percent sure," Nicollin told AFP on Friday.

"I am wary of these agents," he added. "There is an Argentine, a North African…there are at least 10! I have decided to give it until Monday to see if there is somebody I can trust.

"I keep getting faxes telling me 'it's ok' and then nothing comes. I am not going to fool around indefinitely. There is not just Maradona. I am working on other possibilities, and there are plenty of them."

Maradona, the star of Argentina's 1986 World Cup-winning team, is prepared to speak to Montpellier about their soon-to-be-vacant coaching position, according to Youssef Haijoub, the manager of sports marketing agency SGM, who own the former player's image rights in France.

SGM have exclusive rights to negotiate in Maradona's name in France, and already have links to Montpellier after organising the club's January tour to
Morocco.

Maradona currently lives in Dubai where he works as an ambassador for the Dubai Sports Council.

He coached Argentina at the 2010 World Cup in South Africa, where they reached the quarter-finals before losing 4-0 to Germany, and most recently had a spell in charge of Al-Wasl in the United Arab Emirates.