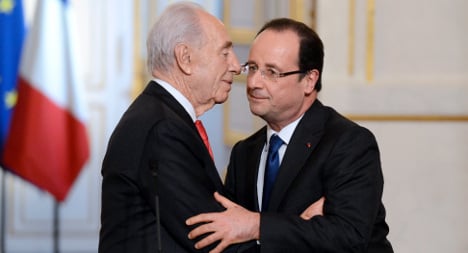 Western powers suspect Iran's nuclear programme to be a cover for building an atomic weapons capability, a charge which Tehran strongly denies.

"I have said how much we want the sanctions to be beefed up, which are already efficient," Hollande said after meeting Peres.

The meeting saw the group offer Iran a softening of non-oil or financial sector-related sanctions in exchange for concessions over the country's uranium enrichment operations.

"The sanctions are effective more than we thought but not enough… and I was very glad to hear from the president (Hollande) that he plans to take more measures because if we can end this danger without military use, it will be better," Peres said.