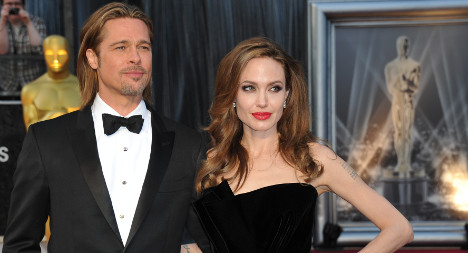 The couple recently teamed up with the French winemaking Perrin family to develop the "Miraval Cotes de Provence" label, named after their Chateau Miraval estate in the south of France.

Thursday was the moment of truth with the first 6,000 bottles going on sale to the public at around €17.5 a bottle.

"Selling started at 9:00 am (0800 GMT) and everything was sold by 2:00 pm" during the online sale, said Vitabella, a public relations firm representing the vineyard

The vineyard's website also said that orders for the 2012 vintage were now closed.

The 2012 vintage, produced from the couple's sprawling estate near the town of Brignoles, was priced at a relatively reasonable 105 euros ($138) per case of six bottles for the Internet sale.

Another 100,000 bottles have been sold to wine merchants and restaurants.

Jolie and Pitt acquired the 500-hectare (1,200-acre) estate in 2008 for around 40 million euros and have used it as a summer residence. The estate includes around 50 to 60 acres of vines.

Marc Perrin of the family that partnered with Jolie-Pitt said in February that the couple were involved in the production process and wanted to do more than "just put their name" on the label.