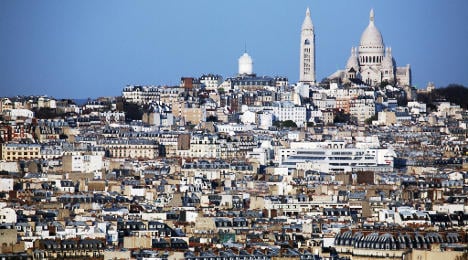 A view of the 18th arrondissement with the iconic Sacre Coeur towering above. Photo: Bill Hails

If your impression of the 18th is based entirely on the blockbusters ‘Amélie’ set in touristy Montmartre and ‘Moulin Rouge’ in the red light district Pigalle, then think again!

What tourists often don’t know is that the dix-huitième, as it’s called in French, is in fact one of the largest, most culturally diverse – and yet most quintessentially Parisian – of neighbourhoods. In 2005, 37 percent of children under the age of 18 in the area were of North African, Sub-Saharan and Turkish descent.

Attracted by the reasonable apartment prices and convenient transport links, an influx of youthful artistic residents gives it a bohemian vibe.

What's there to do?

A lot! If you've been to Paris you've probably already heard of the Sacré Coeur and the Moulin Rouge. But that's not all the district has to offer. If you're an Amélie fan why not take a walk around the area of Abbesses metro where it was filmed, or climb up to the very top of the hill for fantastic views of the whole of Paris. If you're interested in local history you can pop into the Musée de Montmartre. Most things tend to be closed on Sundays but you can spend all day rifling for bargains at the famous flea market, held every Sunday in St Ouen.

So, just how cheap is cheap in the 18th?

Well, obviously it depends on the size of the apartment you're looking for and the location. In France, housing is measured in square metres. According to statistics published in February this year, the average price per square metre in the 18th is €7,773. The lowest is €5,553 and the highest is €10,308.

Looking for a house in France? Check out The Local's property and rental sections.

What about if I want to rent?

How much space will I have?

With 69 percent of housing built before 1949, you're almost guaranteed beautiful architecture and high ceilings. Around 15 percent were built between 1949 and 1974 and eight percent between 1975 and 1989. Five percent of properties were built in the last 20 or so years.

As mentioned above, the area has a young, bohemian vibe. With a population of 191,524, it's among one of the most populated parts of the city. Bearing in mind that many Parisians live alone, the average income per household in the 18th is currently €24,229 per year.

Yes, but chances are you've never heard of them or they died years ago. The 18th is currently home to Academy Award-winning filmmaker Claude Lelouch (you can find his cinema on Avenue Junot near the metro Lamarck-Caulaincourt), actor Alain Chabat and comedian Jean-François Balmer.

Poet and screenwriter Jacques Prévert and singer-actress Dalida (whose grave can be found in Montmartre cemetery) also used to live here.

Check out our gallery to view some properties and attractions in the area.

Are there any hospitals in the area?

There are two: the Hôpital Bichat-Claude Bernard is located at 46 Rue Henri Huchard and the Hôpital Bretonneau at 23 Rue Joseph de Maistre.

You can find a list of primary schools here and the latest league tables for high schools here.

The area has excellent transport links and is served by lines 4, 12 and 13 on the Metro, as well as numerous bus lines. The RER stops at St Ouen.

Get the latest exchange rates and transfer money on The Local's Currency page.