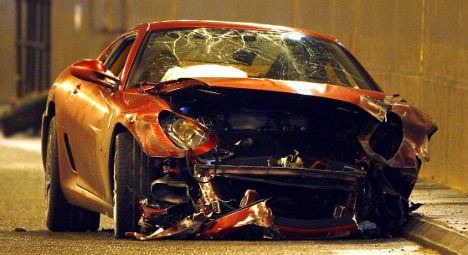 The crashed ferrari belonging to Manchester United's Cristiano Ronaldo is pictured in a tunnel near Manchester Airport in Manchester: Photo: Andrew Yates/AFP

Renaud Bettcher told AFP that he and his client – a garage owner from the eastern city of Strasbourg – were "very satisfied" that they had finally been given the go-ahead to sell the car, after eBay asked for proof of its provenance.

The site would also pay undisclosed damages to the dealership, the lawyer added. According to the Dernieres Nouvelles d'Alsace newspaper, the figure could be as much as 20,000 euros ($26,000, £17,000).

Star Autos took action against eBay after the auction site withdrew an advert for the sale of the car "for security reasons" and concern that it may not have been genuine.

It then asked the garage to provide proof about its previous owner, which Bettcher said they supplied three times.

No date was given for the new sale.

The garage bought the red Ferrari 599 GTB from a Portuguese vendor for about 33,000 euros and had been asking for 50,000 euros for it at auction.
Bids had reached 125,000 euros when the item was withdrawn.

Ronaldo crashed the 250,000-euro sports car into a barrier near Manchester airport in 2009, a week before the then-Manchester United striker was awarded the 2008 Ballon d'Or as world player of the year.