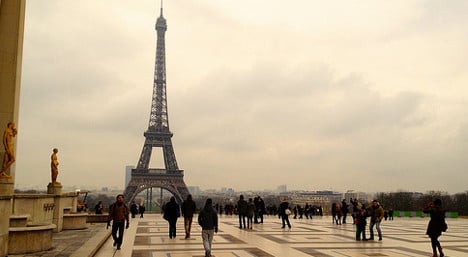 France’s lack of competitiveness has become a sensitive issue in recent months as the country’s economy lurches to a halt, but no one would have thought its booming tourism industry would be left lagging behind.

That was until Thursday, however, and the release of a new report by the World Economic Forum on the competitiveness of the global tourism industry.

The study shows that France’s position in the global rankings has suffered in the last two years, dropping by four places to seventh spot.

Switzerland heads the 140 nation league table, which is based on a country’s attractiveness and its ability to develop its travel and tourism industries.

According to the report, France’s policy rules and regulations have not helped to develop the sector, despite the fact the country still manages to attract millions of visitors through its doors each year.

The WEF says France’s position in the global rankings is undermined because of a lack of “quality and availability of qualified labour" but also because the government has not prioritised the Travel and Tourism sector.

“This is not the impression I have. Professionals in the tourism industry know my priorities. They are willing, dynamic and sincerely wish to be involved in the implementation of the government’s plans,” she said.

“France’s tourism industry has withstood the financial crisis better than other sectors. It is a magnificent asset for the country,” she added.

The report does commend France for its road and rail infrastructure as well as its number of World Heritage cultural sites – the fourth most in the world.

In 2012 the tourism industry in France generated $103.4 billion (€79 billion) in absolute terms – the equivalent of 3.7 percent of the country’s GDP, according to figures quoted in Le Point.

Paris, the most visited city in the world, continues to rake in millions of euros to French coffers.

Paris hotels hosted a record of 15.68 million guests in 2012 as the City of Light drew 29 million tourists despite Europe's crisis, the city's tourism office reported recently.

A rise in foreigners staying for a total of 23.9 million nights in hotel rooms helped compensate for a decline in domestic French visits to 13 million nights.