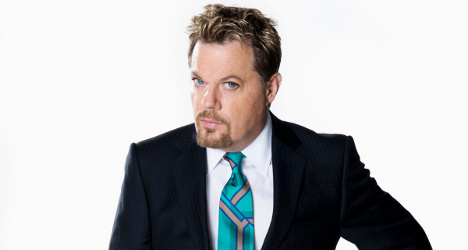 Britain's Eddie Izzard has become one of the most popular comedians of all time. His absurdist, rambling style gained a global audience on shows like Glorious and Stripped and won him an Emmy award in 2000 for Dress to Kill. But Izzard is not just about the comedy. In 2009 he ran 43 marathons in seven weeks to raise money for charity. Now 51 years old, he is preparing to embark on 'Force Majeure' – billed as ‘the most extensive comedy tour ever’. As a prelude, he is performing a mini-tour of France, which started on March 8th in Menton, and ends on Wednesday night at l'Olympia in Paris, where he will perform his act entirely in French.

The Local managed to catch up with Izzard, who spoke to us by phone from New York.

How did you become so enamoured with French culture?

My dad used to take us from Newhaven in Sussex across to a place called Fécamp (Normandy) and we'd go camping there. Then I did an exchange trip in Châlons-en-Champagne, near Reims, and got into the language.

Why have you decided to bring your show 'Stripped' to France and perform in French?

I think it's a very clever idea, even though it's my own idea. I'm taking this product – which is me talking weird bollocks – and I'm just going to take each word of that bollocks and say it in French. And by the way, I will also be performing in German, Russian, Spanish and Arabic. However, I'm so bloody excited about this French tour. I think I'm doing the first ever comedy tour of France by an English-speaker – in Menton, Lyon and at l'Olympia in Paris. Edith Piaf played the Olympia, so did Jacques Brel, Jimi Hendrix, the Stones, Bowie, and now me.

What does that mean to you?

I think it's bloody beautiful, if you think about Agincourt, and all this scratchiness and war between England and France over the years. If you took William the Conqueror in the middle of the Battle of Hastings and said, “One day an English guy will be doing comedy in French in France,” he'd have said no way. So it really means something, me doing a gig in French at l'Olympia.

You mentioned 'bollocks'. Are there any English phrases that you haven't been able to find 'le mot juste' for in French?

Well, 'bollocks' doesn't even translate in America sometimes. I do a whole gig in French, it's not Franglais at all, except for one word, which is the word 'fuck'. So I've started saying 'abso-fucking-lument' and 'formi-fucking-dable.'

So sometimes translations don't fit perfectly, but the ideas do. We're all human beings, we all go to supermarkets, we've all got kids who have to go to school – all those things match up, even though you might not be able to say 'bollocks.'

With all these projects you're undertaking – a world tour, performing in several languages, your series 'Meet the Izzards' – do you have an overall aim? Are you trying to unify the planet?

Well, I am going into politics. In 2019 I'm going for the Labour Party nomination for Mayor of London and hopefully running in 2020. So I do feel it's useful. I want to go out and meet people, learn languages and make contacts. Because you can get into politics when you're younger, and then try to develop a world vision, but I already have my world vision.

What's standing in the way of that vision?

There will always be vested interests looking to separate us. The right-wing press and extremists in Britain are always saying “Hate the other people, pull away, don't help anyone.” And they seem to have a lot of energy, so someone's got to stand up and say: “No, let's look out for everyone”. I'm going to put my energy into that – that's my mission in life, I think.

What do you make of David Cameron's promised referendum on Britain's place in the EU?

The British people are not necessarily happy with exactly how Europe is set up, or their part in it, so we have to look at that. But politics of the centre are complex, and politics of the extremes are simplistic, and they're always dealing with a short-term, simplistic view – that we should just pull out.

In the long term it's better to be in Europe, fighting for our cause in Europe, but that's a long-term view and its a little difficult to sell because its more complicated, so it can be beguiling to look to the right wing.

This tour spans 26 countries and four continents. It's the biggest comedy tour in history. Why are you doing this now?

If you want to get yourself out there, you can do the bullshit gossip column method, or you can play the bloody world, do gigs in French, and run 43 marathons. This is my method.

But you've already got all the plaudits, so what could you possibly have to prove to anybody?

What am I trying to prove? That I can do this, but also that we can all do this, we can all do more than we think we can. There's nothing particularly special about me except I'm a determined bastard.

Eddie Izzard’s mini-tour of France (in French) starts in Menton on March 8th. For information on tickets, click here. ‘Force Majeure’ starts in Austria on March 18th and continues throughout Europe, the UK, Russia and the rest of the world this spring. ‘Meet the Izzards’ is currently showing on BBC One.