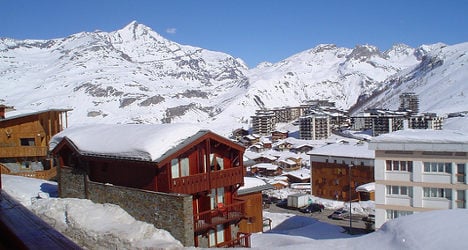 File photo of the resort of Tignes: Photo: jschauma/flickr

The victims, an instructor and his client, were swept to their deaths by a wall of snow they most likely triggered themselves as they passed through a wooded area at 2,100m altitude, station director Arnaud Trinquier told AFP.

On Tuesday, four French climbers died after being engulfed by an avalanche as they attempted to scale the Goulotte des Enfers, an icy chute at a height of about 2,600 metres.

The identities of the skiers killed on Wednesday were not immediately released.

Their death comes just two days after a ten year old girl died in the popular resort of Morzine when she crashed into a safety barrier at the bottom of a slope.

Her death was the latest in a series of accidents in the French Alps, which have left several teenagers dead.

More than a dozen skiers and snowboarders have died in winter sports since December 2012. Just two weeks ago, a 15-year-old skier was killed after hitting a tree in the resort of La Plagne. And earlier in February a teenager drowned after crashing into a river while skiing off-piste in the resort of Avoriaz.

Alpine resorts are currently experiencing their busiest two weeks of the year as thousands of Parisians head to the slopes during their two-week winter break.

Elsewhere in France the region of Pyrenees-Orientales was placed on red alert over the risk of dangerous floods. The alert, the highest level of warning was implemented by the country's weather service, Meteo France, and will stay in place until at least 6am on Thursday.

Two people have already died in floods in the region. On Wednesday the body of a female motorist was found at around 11am, around four hours after she was swept away in a raging waters near the village of Pollestres, just south of Perpignan. On Tuesday a man was also killed in a flood near the town of Narbonne.