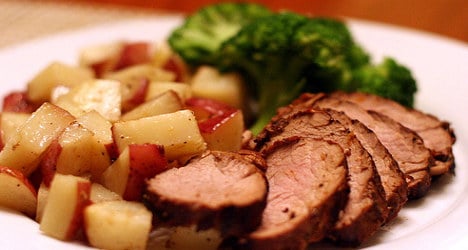 From this month onwards the school in the village of Arveyres in the Gironde region of south-west France will no longer offer a meat alternative to those children who do not eat pork, which is forbidden under Jewish and Muslim dietary laws.

Around 30 of the 180 children used to be offered a substitute meat when pork was on the menu, France's TF1 television reports.

Parents of some of those pupils affected have taken umbrage to the decision.

Certain parents had even offered to cook meals for the children and bring them to school but their offer was dismissed by the town's mayor because it would be "logistically hard to implement and ethically shocking".

The mayor of Arveyres, Benoit Gheysens told AFP the move was being taken because of the cost of providing alternative meals, many of which went to waste.

"Often children who did not take the substitute dinner complained as well and left the pork. It distressed the staff to see how much food was wasted," Gheysens said.

The mayor, who believes the school in Arveyres is not the only one in France facing such a dilemma, has vowed that the children will get all the protein they need saying vegetables, salads and lentils will be offered when pork is on the menu.

The mayor said pork was served no more than once a week.

The issue of halal meat is often a controversial topic in France and has been used as a political football, especially when elections approach.

Marine Le Pen the leader of the anti-immigration National Front party launched a fierce row before last year’s presidential elections when she claimed all meat from abatoirs in the Paris region was prepared using Islamic halal traditions and non-Muslim consumers in the capital were being misled.

Former Interior Minister under Sarkozy, Claude Gueant, said at the time that halal meat was one reason why the government opposed François Hollande's plan to give foreign residents the vote in French local elections.