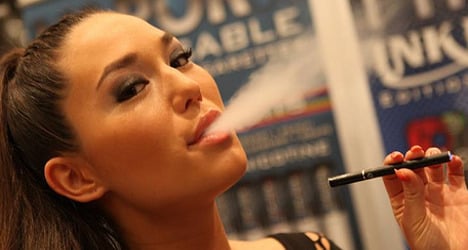 After a wave of recent publicity around electronic cigarettes France’s Health Minister Marisol Touraine announced on Tuesday she had demanded an investigation be carried out into the nature and risks of the product.

Around half a million French people are estimated to use electronic cigarettes as a way of weening themselves of traditional tobacco filled fags.

“I have asked my staff to tell me precisely what type of product this is. Is it simply a consumer product or is it part of a medical initiative? What are its characteristics,” she asked.

“We need to evaluate the benefits and the risks of these devices, which raise a number of issues,” Touraine added.

The battery powered, pen-sized products contain liquid nicotine that is turned into a vapor which is then inhaled. Their obvious health benefit as opposed to smoking is that they don't contain tobacco and other harmful chemicals found in cigarettes.

People can freely use them in bars and restaurants, where traditional smoking is banned as well as at work.

According to estimates in French daily Le Parisien a smoker who consumes packer of traditional cigarettes a day will spend an average of €200, four times more than they would do if they switched to the electronic alternative.

The French minister is not the first in France to call for caution when it comes to electronic cigarettes, for which no official study has ever been carried out.

As far back as May 2011 the French health agency AFSSAPS advised against using the devices, saying they still contained nicotine, which even at a low concentration could lead to ‘damaging side effects’.

Professor Bertrand Dautzenberg, a Paris based pulmonologist told Europe1 radio, the device could have the opposite effect that is designed for.

“These electronic cigarettes could also lead children to start smoking,” he said, insisting they should be banned from children. “If the harm in the short term is clearly low, we have absolutely no idea that if they will help to rid people of their nicotine addiction," he added.

However "for the big smokers, I believe these will reduce the health risks", Dautzenberg told Le Parisien in a separate interview. The specialist insisted the best way to give up smoking was the patch "which releases nicotine gently and will reduce the addiction".

Is this the end of France's smoking culture?