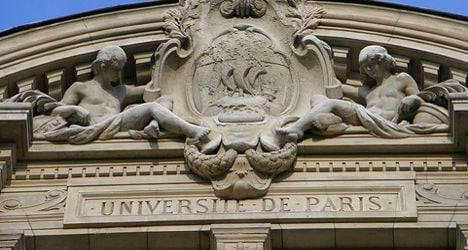 France may be one of the most popular countries for foreigners to study in but it appears its universities have not forged a strong reputation around the globe.

The publication of the Times Higher Education 2013 World Reputation Rankings for universities revealed France had four in the top 100 but worryingly none in the top 50.

“What’s notable about France is that they don’t have a university high in the rankings. There is no flagship institution up there among the world’s very best,” Phil Baty editor of the Times Higher Education Rankings, told The Local.

“It’s a bit of a blow to national pride," he added.

The highest placed French university was the famous Paris Sorbonne, which was ranked in the 71 to 80 band.

Two other French institutions – the Pierre and Marie Curie University and Ecole Polytechnique were ranked in the 81 to 90 band and University Paris Sud was placed in the 91 to 100 band.

"It must be cause for significant concern that France, which has such a fine tradition of scholarship, personified by famous names such as the Sorbonne, has no institution ranked higher than the 71-80 band," Baty said.

“So there is work to be done: having high-profile, well-regarded institutions recognized by scholars as being among the world’s best is vital for the future success of France’s higher education system and knowledge economy.”

The reputation rankings are based on a global invitation-only opinion poll carried out by Ipsos MediaCT for Times Higher Education’s rankings data supplier, Thomson Reuters.

The 2013 results are based on 16,639 responses from senior published academics.

Baty says the simplicity of the way the survey is done means the results cannot be dismissed.

“We got results from over 16,500 academics all over the world. We simply asked them what the best university was in their field and collated the results and French institutions are simply not being mentioned anywhere near as much as those in the US, UK or Asia,” Baty said.

Baty believes the blame for the underwhelming reputation of French universities may lie at their own door.

“I think there has been a certain amount of confusion about the French system. There’s lots of complicated names and the structure is not particularly clear. There are also some language issues. French academics are not publishing work in English the way universities in say Germany or Asia do," Baty said.

“There’s also the fact that a lot of Western Europe is saddled with austerity and universities are not getting enough funding."

But Baty stressed that it was not all bad news for France.

“You we need to remember those listed are the world’s most reputed universities, which represents only about 0.5 percent of the worlds higher education institutions and France has four among them.

“France has started to concentrate on its top institutions and there are some encouraging signs.

“The results might be disappointing but they are not cause for alarm.”