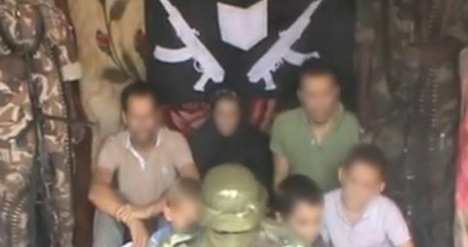 A screengrab from a YouTube video claiming to show members of a French family taken hostage in Cameroon.

The call was issued against a background of fears for the lives of the hostages following the reported killing of two Al-Qaeda-linked leaders by French-backed Chadian troops in Mali over the weekend.

"France must give AQIM (Al-Qaeda in the Islamic Maghreb) clear signals of a willingness to negotiate, in liaison with (the hostages' employers) Areva and
Vinci," said a statement issued on behalf of the families of four hostages seized at a uranium mine in Niger in 2010.

According to Chadian officials, Mokhtar Belmokhtar, the mastermind of an assault on an Algerian gas plant that left 37 foreign hostages dead in January, and AQIM leader Abdelhamid Abou Zeid were killed last week in an assault on rebel bases in the Ifoghas mountains of northern Mali.

France has been extremely guarded about the reports, amid concerns the hostages may have been used as human shields or could be subject to reprisal executions.

Earlier on Monday the French army's chief of staff, Admiral Edouard Guillaud, said Abou Zeid has "likely" been killed in Mali as reported by Chadian forces.

"It is likely, but it is only likely," Guillaud said when asked about the killing on Europe 1 radio, adding that French authorities cannot "have any certainty right now because we have not recovered the body."

There are currently 15 French hostages being held captive in Africa, including seven members of one family who were kidnapped last month in northern Cameroon.

The families are concerned that the death of any Al-Qaeda leader may lead to retribution being carried out against the hostages.

After the kidnapping in Cameroon French Foreign Minister Laurent Fabius said France would not give in to terrorists.

Seeming to exclude the possibility of paying a ransom, Fabius told the National Assembly: "We must do the maximum [to free the hostages] but nothing would be worse than yielding. We will not yield to terrorist groups."