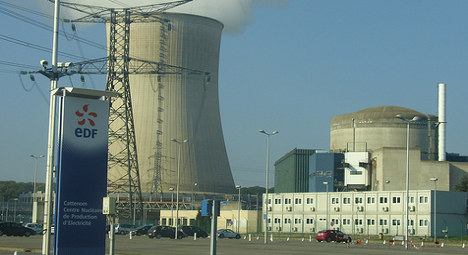 The accident on Thursday at the Cattenom atomic energy plant in the Moselle region of northeastern France was not connected "to any nuclear risk", local officials in Moselle said.

The accident, which occurred around 4:35 pm (1535 GMT), saw the trio fall four metres (13 feet) from a cherry-picker platform in a part of the plant that was closed for maintenance, firefighters said.

The two deceased men were aged 42 and 44. The third victim is not thought to be in critical condition.

"The three labourers, who worked for subcontractors, were victims of a fall as they carried out maintenance work in reactor building number four," the plant's management said in a statement.

The cause of the accident was not immediately clear, though it appeared something broke as the workers tried to manoeuver the platform, local prosecutor Jean-Francois Mailhes, who has opened an investigation into the incident, said at a press conference.

France's Nuclear Safety Authority and the regional police of Metz have been charged with handling the probe.

The four reactors at Cattenom make up France's second-largest nuclear facility, in a country which derives well over 80 percent of its energy needs from atomic power.

FAMILY
How to register a death and arrange a funeral in France
Url copied to clipboard!