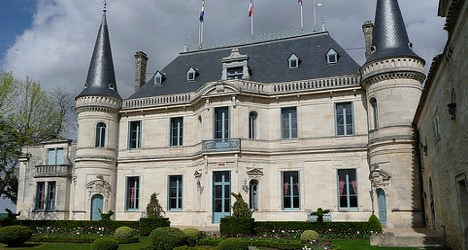 Chateau Palmer, where thieves struck in the dead of night to steal 318 bottles of grand cru. Photo Jamesonf/flickr
Burglars raided the famous Chateau Palmer cellar in the dead of night last Sunday, pilfering 318 bottles of fine wine worth an estimated €220 a bottle.
It does not happen often but thanks to a slice of luck, police managed to solve the crime even before the alarm had been raised by the Chateau's owners.
The theft was discovered early the next morning thanks to the work of an entirely separate police investigation.
According to the regional paper Sud-Ouest, Bordeaux's police force had been looking into three shop break-ins in the area for several weeks.
As part of their investigation, police raided the houses of some prime suspects in the early hours of Monday morning including a 25-year-old with a previous conviction for attempting to force open a cash machine with a grinder in the town of Saint-Germain-du-Puch in February 2012.
But failing to realize the police were on to him the thief had stored  the 30 stolen cases of fine wine in his own apartment. Police naturally became suspicious about the presence of €72,000 worth grand cru and arrested him on suspicion of theft.
Three suspects were taken into custody on Wednesday. All suspects deny involvement in the burglary.
The missing 318 bottles have since been returned to the wine cellar.
It is not the first time France’s lucrative wine industry has been targeted by thieves.

In 2010 burglars broke into a vineyard and stole an entire crop of Cabernet Sauvignon grapes.

The thieves used a harvesting machine to pilfer 30 tonnes of vines from the vineyard in the Languedoc-Rousillon region. The theft was worth around €15,000