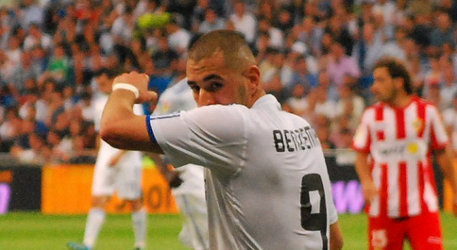 Karim Benzema risks being handed a prison sentence after allegedly being caught driving in Spain at over 200kph, double the legal speed limit for the stretch of road.

Benzema was reportedly driving home on February 3rd after a match in which his Real Madrid team were beaten by lowly Grenada.

The striker was clearly eager to get home after the embarrassing defeat but to add to his woes he was flashed by a speed camera driving his Audi at 216kph, Spain's El Pais newspaper reports.

In a twist of fate Benzema will be judged on the same day France play Spain in a crucial World Cup qualifier in Paris. It is not clear whether the player will be required to appear in court.

Benzema's team mate Michael Essien was also reportedly caught speeding at 150kmp on the same stretch of road on the same night. Spanish newspaper El Pais reported that he paid a €200 fine upfront to avoid any court proceedings.

On the same stretch of highway a Porsche was reportedly flashed travelling at 260kph but the identity of the driver has not been revealed, although he Spanish authorities have confirmed he is a Real Madrid player.

Because of the speed he was travelling at the striker faces having his license confiscated for four years as well as the prospect of a prison sentence, according to TF1 television.

It is not the first time the player's driving has landed him in trouble. In 2009 he was involved in a relatively serious car accident after a match against Barcelona and ton Christmas Eve that year he allegedly crashed a Lamborghini on the island of Reunion ( see video below) although the player denied being behind the wheel.

Benzema, along with compatriot Franck Ribéry, is currently awaiting trial in connection to the allegation of soliciting sex from a minor in 2008 and 2009.

Although the pair deny the allegation they face up to three years in prison and a maximum €45,000 (£35,000, $55,000) fine if convicted. Their trial, in which six other people will also be in the dock, has been scheduled for June.