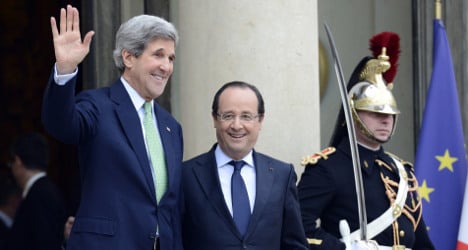 US Secretary of State John Kerry outside the ELysée Palace with François Hollande on Wednesday. Photo: Bertrand Guay/AFP

US Secretary of State John Kerry said Wednesday the United States and France were mulling ways to speed up political transition in war-torn Syria, which would be discussed in a "Friends of Syria" meeting in Rome.

"We are examining ways to accelerate the political transition,", Kerry said, addressing a joint press conference with French Foreign Minister Laurent Fabius. He said this would be discussed at the Rome meeting Thursday.

Kerry also signalled that Washington could be mulling increased aid to the Syrian opposition, saying: "The opposition needs more help. "We think it's very important that more of our assistance gets to areas that have been liberated from the regime," he said.

Citing US and European officials, the Washington Post newspaper said the White House is mulling a major policy shift on Syria and is toying with the idea of supplying rebels with direct aid like body armour, armoured vehicles and even military training.