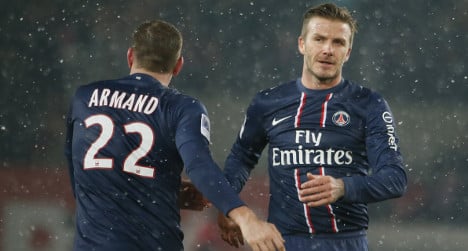 "It's an important position," added Ancelotti. "Beckham must help make the play and defensively have a good tactical position on the pitch – he will have the same things to do as Verratti," said Ancelotti, who believes the 37-year-old still has plenty to offer.

The former Manchester United and Real Madrid star, on a five-month contract, made a cameo debut appearance from the bench at the weekend, setting up the second goal in a 2-0 league win over Marseille which put the capital club three points clear at the top of Ligue 1.

Marseille coach Elie Baup, having been on the receiving end of Beckham's talents last Sunday, said Tuesday his men were forewarned as they look to end their rivals' cup hopes.

Noting PSG's speed in launching attacks, he suggested the former England star was a good fit for his new club.

"Beckham absolutely has his place in the role of supplier — he sent in a few balls during the quarter hour he played. If PSG retain the same strategy as Sunday he will rapidly fit the mould in terms of passing and dead ball situations.

"But we will be out to get the best result possible. Paris are putting in place a future of the highest quality but in a one-off match we can knock them out of their stride and get a result," Baup insisted.

Meanwhile, PSG sporting director Leonardo told AFP on Tuesday that Beckham has a lot to offer the capital club on the pitch and hit out at those who are sceptical as to the reasons why the Englishman was signed.

"I am happy but it's not a surprise, I know him well," said the Brazilian of Beckham's debut appearance.

"Beckham is not sitting a test, he is here to help us. I have always said that he is here for the sporting side.

Leonardo also attacked those who have criticized Zlatan Ibrahimovic for his recent performances.

The Swede scored his 22nd Ligue 1 goal in 23 appearances in the weekend win over Marseille, but his all-round display was not in keeping with the high standards he has set since arriving in French football.

"He has scored 22 goals and provided four assists in the league," said Leonardo.

"Since the winter break he has scored four times. He is involved in every decisive and important move, but it is not possible to be in your best physical condition for ten months.

"You can't judge his season just on his recent performances.

"When I hear people talk, commentators, pundits, I get the impression we annoy them.

"In fact, we are getting to exactly where we wanted to be. We arouse jealousy and it is better that than pity."