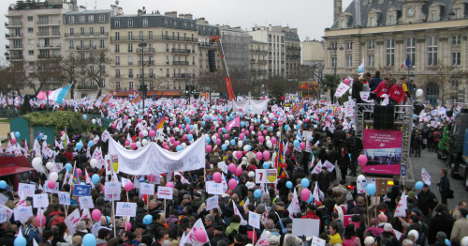 The payments were not an honest attempt to pay up but made as part of an ironic protest after anti-gay marriage campaigners became infuriated when Paris Mayor Bertrand Delanoë demanded they stump up €100,000 to pay to repair the damage done to the grass at the Champ de Mars after a mass rally last month.

Under the instruction of activist Frigid Barjot, the leader of the collective "Manif Pour Tous" (Demo for All), hundreds of thousands of protesters were urged to send “a cheque of between ten centimes and one euro" to Delanoë.

According to French television channel TF1 an incredible 9,000 protesters responded to her pleas to dip, ever so slightly, into their pockets.

Unsurprisingly the grand total of their fund-raising efforts is a paltry €900, according to a spokesperson for Paris Town Hall, who said the donors will not get the satisfaction of receiving an acknowledgement of their generosity.

“The law does not oblige us to send receipts to donors, only in the case of rare donations made in change, which will be done,” the spokesperson told TF1.

Delanoë's decision to send the bill was strongly criticized by some opposition MPs and members of ‘La Manif pour Tous’, who complained that the mayor – himself an open supporter of gay marriage – would never have done the same following a pro-gay marriage rally.

Barjot's ironic protest comes at the same time as campaigners against same-sex marriage accused the French government of throwing their 700,000 signature “into the bin” by ignoring their concerns.

According to Le Figaro newspaper French authorities have decided it was not possible to accept the petition.