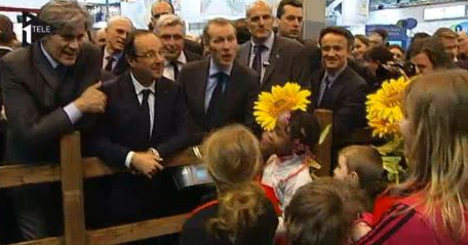 Hollande took a humorous swipe at the man he defeated in last year’s presidential elections when he paid a visit to the annual Agricultural Fair (Salon de l’Agriculture) in Paris on Saturday.

After a young boy approached him and said “I have never seen Nicolas Sarkozy”, Hollande smiled and replied “Oh well, you’ll never see him again.”

The comment was met with heartfelt laughter by all those gathered around the president, who has a reputation in France for cracking jokes.

However those on the right and especially Sarkozy’s former allies did not see the funny side.

Nathalie Kosciusko-Morizet, former spokeswoman for Sarkozy during his failed re-election bid said it was “an insult to the millions of French people who had voted for Nicolas Sarkozy”.

NKM, as she is known in France, added that the comment was proof the president is obsessed with the man he ousted from the Elysée Palace.

A furious Luc Chatel, a former government minister under Sarkozy said France needed a “president to perform his duties, not a variety performer”.

“Behind Monsieur Petite-Blagues (Mr Little Jokes) he hides a lot of pettiness towards his predecessor.”

This is not the first time a president has sparked controversy on a visit to the Salon de l’Agriculture, held at Porte de Versailles every year.

In 2007, Sarkozy famously told a farmer to “Get lost you poor idiot” after he refused to shake the then president's hand.

It is possible that Hollande’s joke at Sarkozy’s expense could come back to haunt him, with increased speculation that the former president will try to regain his place at the Elysée Palace in the 2017 presidential elections.

Members of the UMP are not likely to forget the joke in a hurry, as deputy Lionnel Luca suggested.

The joke may even give Sarkozy that little bit of extra incentive to wrestle back the presidency from Hollande.

"Only a court can stop Sarkozy making a comeback" – Click here to read an expert's view of the chances of Sarkozy becoming president again.