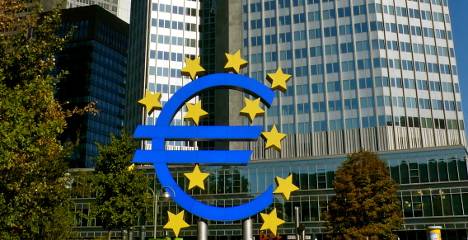 The French government recently acknowledged that its forecast for 0.8-percent growth this year was out of reach, meaning its budget planning to reach the European Union deficit ceiling of 3.0 percent of output was no longer sufficient.

Budget Minister Jerome Cahuzac told Europe 1 radio that France's "budgetary situation is such that we have to find €6 billion in extra receipts."

But he did not specify how this would be achieved saying taxes "are already very high in France." French ministries have been informed how much to cut spending in order for the government to generate €2 billion in savings this year.

"Economies in public spending are inevitable," Cahuzac said. "We have started to do it, we will continue to do it," he added.

Benoît Coeure, a Frenchman who sits on the managing board of the European Central Bank, said on Monday that Paris had to take strong action to convince its European Union partners that it was serious about keeping to the EU's deficit norms.

"As for credibility on the short-term, France must absolutely respect its commitment to cut the structural deficit," Coeure told financial daily Les Echos.

"In the medium-term, it has to take quick and concrete decisions to achieve spending cuts, so that France reassures its European partners," he said.

Coeure said that slashing expenditure was the best way out for France. France's public accounts court, which audits government spending and provides policy advice, has also urged the government to focus on spending cuts.

On Saturday, Hollande underscored the need for "economies in all budgets" of the state organs to allow for a balanced economy in 2017, saying that so far his government had put two thirds of the effort of budget correction on increased taxes but now the emphasis would have to switch to expenditure.

The European Commission has indicated that it may give France some slack in achieving the deficit target, and the IMF has recently warned EU countries that cutting deficits too fast was harming growth.