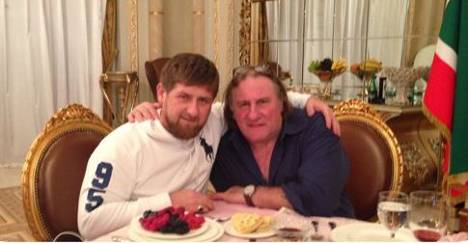 The French actor, who was given Russian citizenship by President Vladimir Putin amid a tax row with Paris, arrived in Chechnya's main city Grozny on a private jet after touring dairy factories in Saransk, the city in central Russia where he took residence at the weekend.

The actor toured sights in Grozny Monday after dancing the night away with Chechnya's leadership. He visited several museums and the city's giant mosque, where he "was shaken by its grandeur and beauty," the Chechen government website said.

Russia's state-controlled channels followed spellbound as Depardieu was hosted by a tracksuited Kadyrov in his vast residence, where entertainment included a children's folk dancing troupe in national costumes and a female singer in a hijab who performed a French hit song "Je t'aime".

Footage showed Depardieu eventually breaking into a dance at the party late Sunday, attempting to do the Chechen lezginka (national dance) alongside a young woman in a coloured scarf, as his host and other officials clapped with contented smiles.

"This is a visit to see my friend," Depardieu was quoted as saying Monday by the Chechen government press service.

Kadyrov, 36, who has ruled Chechnya with an iron grip since 2007 and oversaw vast redevelopment and Islamisation in the war-torn region, is loathed by rights campaigners who accuse him of ordering kidnappings and extrajudicial killings.

The Chechen leader, who recently emerged as a prolific photo blogger, also documented the party on his Instagram site.

One image shows Kadyrov and Depardieu shaking hands over a table full of food, with the caption announcing the start of a new film project called "Heart of a Father", to be filmed in Grozny.

"I want to make a movie here, to show that a big film can be made in Grozny," Depardieu was quoted as saying by the Chechen government's official website. "I want to explain how one man could build a city anew in five years."

"I am sure that happy people live here. Because you need to be truly happy to sing and dance the way Chechens do it," he added.

Rights group Memorial was unimpressed with the French star's antics in Grozny.

"A well-known actor cannot be juggling his name in this way, travelling from dictator to dictator," said leading Memorial activist Oleg Orlov.

Orlov said Depardieu's remarks only showed the actor, once again, as a "dishonourable" man. "This man does not want to understand the realities, he wants to glorify the president of Chechnya," Orlov said, calling Kadyrov "the absolute owner of this small republic, a de-facto dictator.

Gerard Depardieu, who over the years has developed business and personal ties with much-criticized regimes such as those of Cuba or Uzbekistan, was already in Chechnya last October for Kadyrov's 36th birthday.