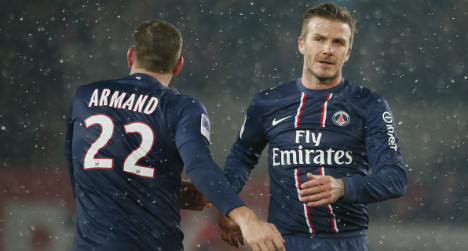 The 37-year-old former England captain shivered on the Parc des Princes bench for 75 minutes on Sunday before being summoned back into the limelight where he inevitably had the final word.

A neat one-two with Jeremy Menez in injury-time allowed Zlatan Ibrahimovic the chance to tuck away the goal that sealed a 2-0 win over bitter rivals Marseille which preserved PSG's three-point lead in France.

"The welcome before the match and when I came on was fantastic. To get the chance at my age to play in a great championship and in a great team, I'm very proud and happy," said the ex-Manchester United, Real Madrid and LA Galaxy man.

"It's fantastic to be amongst these super players."

Beckham, who is on a contract until the end of the season and is donating his $1 million salary to a Paris children's charity, said he had not been disappointed to have been left on the bench.

"I always knew that coming here, at my age and in the transfer window, I didn't expect to start. But that remains the objective."

Wife Victoria braved the freezing temperatures up in the stands to watch her husband, dubbed Le Spice Boy by some sections of the French media, make another debut for another club.

Her cool exterior in the dusting of snow which swept across the ground was in marked contrast to the boyish enthusiasm of her husband who even patiently gave a touchline interview, translated into French by his questioner, as he watched from the bench.

"It was a good debut. It was a very special evening for me. When you come on and it's 1-0, you know it can go either way," said Beckham, the 400th player to don PSG colours.

"If you come on and they score…..happily, it was the opposite that happened.

"I was a little nervous. I had always said that this was a huge challenge for me, so there was a little bit of pressure. But I really enjoyed tonight just as I have enjoyed the last ten days with the team.

"It was tough to get back in shape, but I feel good. It all turned out well."

PSG boss Carlo Ancelotti admitted that Beckham could start Wednesday's French Cup clash at home, which will again be against Marseille.

"He came on because Marco Verratti was tired and we needed fresh players on the pitch," said Ancelotti, who took off Javier Pastore to accommodate Beckham.

"He showed quality with his passes, his experience. He showed good qualities even if it was difficult to judge in only 20 minutes."

Asked if Beckham could start against Marseille at the Parc des Princes, Ancelotti said: "Perhaps. Verratti is suspended, so maybe he will play."

Beckham has already proved a hit with his teammates.

"To play with Beckham was a real honour," said PSG midfielder Blaise Matuidi. "I was a great fan of his when he plays at Manchester United."