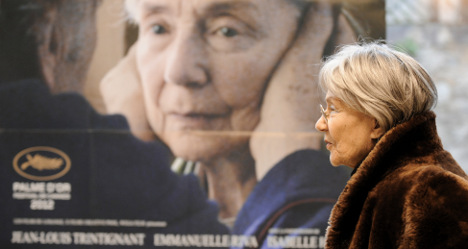 Emmanuelle Riva is an 85-year-old French actor, who first came to prominence in the classic 1959 film ‘Hiroshima mon Amour.’ She has made an unlikely re-entry into the cinematic limelight, with her performance as a retired Parisian piano-teacher in Michael Haneke’s 2012 film ‘Amour'.

Riva was born in 1927 in Cheniménil in eastern France, and after a few years working as a seamstress, moved to Paris to become an actor at the age of 20.

In 1959, Riva played the role of ‘Elle’ (‘She’) in Alain Resnais’ ‘Hiroshima Mon Amour’ (‘Hiroshima My Love’), a film about an extended conversation between a French-Japanese couple. For her performance, Riva was nominated for a ‘Best Foreign Actress’ BAFTA in 1960 (roughly the British equivalent of an Academy Award), but lost out to Shirley Maclaine in ‘The Apartment.’

What’s she done since then?

Well, she won acclaim for her role as Barny, a young widow in the 1961 film ‘Léon Morin, Prêtre’ (Leon Morin, Priest). In the half-century since then her acting appearances have been few and far between, though Riva is also a published poet.

What’s she been up to lately?

Well, 53 years after her only previous BAFTA nomination, Riva finally won the ‘Best Actress in a Leading Role’ award on February 10th. She was unable to attend the ceremony in London however, citing exhaustion: “I am already so, so tired and so, so harassed,” she told The Guardian.

Her performance as Anne Laurent, an octogenarian who lives with her husband (played by Jean-Louis Trintignant) and suffers a series of strokes, has gained her a host of other plaudits, including an Oscar nomination for Best Actress.

If she wins on February 24th, her 86th birthday, she will make history as the oldest person ever to win an Academy Award for acting.

Emmanuelle Riva is an almost impossibly elegant, silver-haired  woman. She’s slow and halting in her movements and speech now, but articulate, engaging and very playful in interviews.

In the course of her publicity duties since the release of ‘Amour,’ she has been seen wearing scarves, fur coats and a variety of jewellery, as well as an exceptionally warm and mischievous smile.

What one moment sums her up?

Well, it's hard to find a single moment to represent someone who's lived such a long life, but check out this 1959 interview at the time of ‘Hiroshima Mon Amour’ (in French, with English subtitles.) As well as being a beautiful, quirky 32-year-old, Riva is full of maturity and self-perception, but without any sense of cynicism or self-aggrandizement.

It's also really charming to hear her talk about trying to escape her 'youthful' label, since her fame now has so much to do with her old age, and her role in a film about dying.

(On her historic Oscar nomination) “This adventure, this gift, in the last stage of my life — it’s not easy to measure up — but it’s the exact moment in my life when I could do it. Before would have been too early. Later might have been too late,” she told The Wrap.