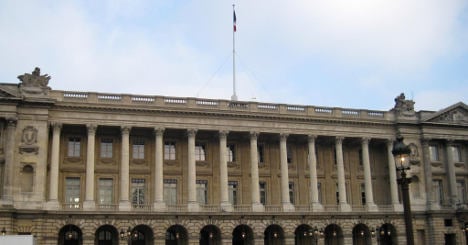 Top of the wish list are Louis XV-style chests of drawers, Art déco armchairs, chairs by fashion designer Sonia Rykiel at €1,200 a piece, a bar created by sculptor César in 1982 worth up to €12,000 and a crystal console table by Philippe Starck valued up to €15,000.
The auction will allow people to “own – among the 3,500 proposed pieces – a piece of the dream of this unrivaled Parisian palace,” said Francois Tajan, co-president of Artcurial in a statement on Thursday. The hotel, which charges €9,600 a night, will only retain essential furnishings. “We’ll keep in particular some Baccarat chandeliers and the fountains from the conservatory of the Château de Versailles,” Sandrine Daban, a spokesperson for the hotel told AFP. When the hotel reopens its doors in 2015 the owners hope to crown it a “palace”, a coveted title currently only held by twelve hotels in France, five of which are in Paris, including Le Bristol where football superstar, and latest addition to Paris Saint-Germain, David Beckham is currently staying. Built in 1775, the building was bought by Count Crillon in 1778 and transformed into a hotel in 1909. It is currently owned by a Saudi prince following a sale in 2010. During the renovation work, the hotel’s 360 employees will have the option of taking a voluntary redundancy or to continue working for the company with the possibility of temporary employment elsewhere. The auction will take place between the 18th and the 22nd of April.