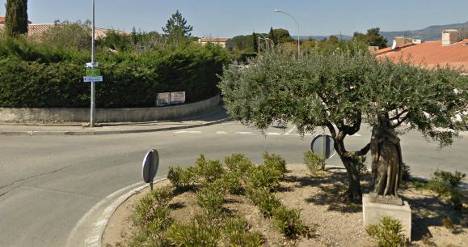 The statue of the Virgin Mary at Cogolin in south-eastern France, with 'Slut Street' off to the right. Photo: Google Maps

Placing a statue of the Virgin Mary on a village street would not normally cause too much consternation in France but when a bust of Our Lady went up in Cogelin, a  village on the south coast, the residents were in uproar.

They were unhappy the mayor Jacques Sénéquier's choice of location was the street "Chemin de la Radasse", literally "way of the slut".

Realising the gaffe, a repentant Sénéquier admitted having not paid attention to the name of the street when he gave his permission for the statue to be erected. “When I took up the position of mayor and discovered this statue in this old warehouse, I thought it was a shame,” the mayor told TF1 television. “That’s why I got it erected near the College of Notre-Dame-de-l’Assomption (Our lady of the Assumption) – I thought it would be a nice reference.”

The statue’s original home had been on the tomb of a well-to-do family in Cogolin. It was moved into storage by the council after the family’s property was sold in the 90s and the grave destroyed. The statue has since been moved to the 'Chemin Notre-Dame-des-Anges', or 'Our lady of the Angels', which the mayor described as “a more suitable location”.