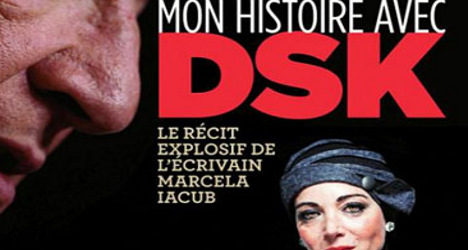 The front cover of France's Nouvel Observateur magazine, which carried an interview with Marcela Iacub, who has written an explosive book on her fling with DSK.

Extracts of the book by lawyer Marcela Iacub, who had a seven-month fling with DSK in 2012, were published in the weekly magazine Nouvel Observateur on Thursday.

The magazine devoted eight pages to the book, named “Beauty and the Beast” and includes very intimate details of the pair's relationship.

"Everything that is creative, artistic or beautiful with Dominique Strauss-Kahn belongs to the pig and not to the man. The man is terrible, the pig is wonderful, even if it is a pig," she tells Nouvel Observateur.

Iacub said her motivation for having the affair with DSK was to do some 'field work' so could later write a book about it. She also said she felt transformed into "saint" who had the job of saving someone so "hated and despised".

Iacub admits that some of the sex scenes in her novel were made up but everything about the affair was authentic.

Asked to giver an opinion on DSK Iacub told the Nouvel Observateur: "This man is not a rapist, nor a villain. His problem is his ego, his spiritual poverty and his lack of sensitivity make him's useless. He believes that others are stupid (…), he feels smarter than them but does stupid things. "

DSK, whose life caved in when he was accused of sexually assaulting a maid in New York’s Sofitel hotel in 2011, has taken umbrage.

In a letter to the magazine’s editor Jean Daniel, DSK, once touted as a shoe-in for the French presidency, wrote of his “double disgust”.

The former French finance minister, who is still being investigated over pimping allegations, accused Iacub of “exploiting feelings of love” for financial gain and criticized the “fantasy nature” of the story. He also described it as a “shameful attack on his private life and his dignity”.

DSK also slammed the magazine for publishing extracts of the book.

“My disgust is even greater towards the Nouvel Observateur, which, in fear of losing readers, has demeaned itself by publishing something normally reserved for the gutter press,” he wrote.

He also told the editor that he would be instructing his lawyers to explore any “legal avenues to fight this abomination”.

The wrath of Sinclair

DSK was not the only one to write a letter to the Nouvel Observateur on Thursday. His ex-wife Anne Sinclair, who comes in for some harsh treatment by Iacub, has also fired off an angry response to the magazine describing its decision to publish the article as "despicable".

Sinclair slammed Iacub as a "perverse and dishonest woman, driven by the fascination of sensationalism and greed."

Iacub said it was Sinclair who wanted DSK to become president and that she had turned him into her "poodle".