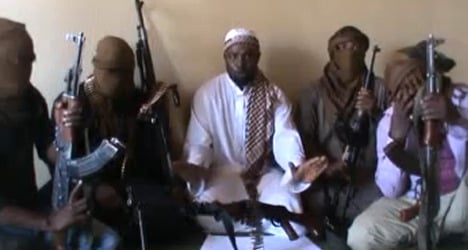 FIle photo taken from a YouTube video in April 2012 apparently shows the leader of Boko Harem, Abubakar Shekau (centre), the group believed to be behind the kidnappings of a French family.

The family – a couple, their children aged five, eight, 10 and 12 and an uncle – were snatched  by six gunmen on three motorbikes on Tuesday.

The abduction of the holidaymakers comes amid fears of Islamist reprisals over France's military offensive against Al-Qaeda-linked groups in Mali.

"The kidnappers have gone across the border into Nigeria with their hostages," Cameroon's foreign ministry said in a statement aired on state television and radio.

The family were abducted early Tuesday at Sabongari, seven kilometres (four miles) from the northern village of Dabanga near the Nigerian border, the foreign ministry said.

They had earlier visited Waza National Park in the north of the country, according to a source close to the French embassy in Cameroon.

French energy group GDF Suez confirmed that one of its employees based in Cameroon's capital Yaounde had been kidnapped along with his family while holidaying in the north of the west African country.

French President Francois Hollande said during a visit to Athens that he had been informed of the kidnapping, suspected to have been carried out by a Nigerian "terrorist group that we know well".

"I note in particular the presence of a terrorist group, namely Boko Haram, in that part of Cameroon, and that's worrying enough," he said, adding at the time that France was doing everything possible to prevent the kidnappers from moving their prisoners to Nigeria.

A Cameroonian security source told AFP: "We have strong suspicions regarding the Islamist sect Boko Haram," which is blamed for killing hundreds of people in an insurgency in northern Nigeria since 2009.

A number of Boko Haram members are believed to have trained with Al-Qaeda militants in the Islamic Maghreb (AQIM) in northern Mali.

The French embassy in Yaounde on Tuesday advised all French nationals in Cameroon's northern border areas to stay indoors.

Though it is the first abduction of Western tourists on Cameroonian soil, there have been several hostage-takings off the coast attributed to pirates, and in neighbouring Nigeria.

In December French engineer Francis Collomp was kidnapped in Nigeria in an act claimed by Nigerian radical Islamist group Ansaru, which is thought to be a Boko Haram splinter group.

On Monday Ansaru also claimed the kidnapping of seven foreigners in a deadly weekend raid on a construction site in northern Nigeria.

Claiming responsibility for that attack, Ansaru invoked "the transgressions and atrocities committed… by European nations in several places, including Afghanistan and Mali", singling out France in particular.

Tuesday's abduction brings the total number of French hostages abroad to 15 – all in Africa, with at least six being held by AQIM.

According to the US monitoring group IntelCenter, France is the Western country with the highest number of hostages being held, followed by the United
States, with nine.

Cameroon, a former French colony of 20 million people, has vast ethnic, linguistic and religious diversity and counts no fewer than 10 active rebellions.