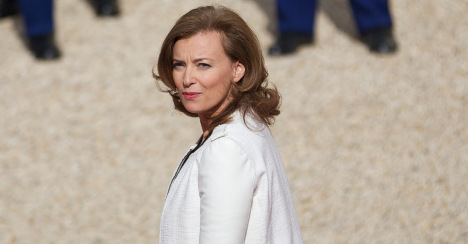 It all began with the February 7th issue of the weekly lifestyle and celebrity magazine Paris Match, which included a four-page feature on a recent ‘lover’s interlude’ between French president François Hollande and his partner, the journalist Valerie Trierweiler.

Over a picture of the president and first lady strolling down the street, arm-in-arm, the cover announces “François Hollande: A strange week" above the sub titles "Triumph in Mali, The War on Unemployment, The Support of Valerie”.

It didn’t take long for journalist Trierweiler, who has been an employee at Paris Match since 1989, to voice her disapproval in no uncertain terms.

According to a report by satirical weekly Le Canard Enchainé, well known for its stories based on leaks, Trierweiler let fly in a voice message left on the phone of her boss, editor-in-chief Olivier Royant.

“I've just seen your bullshit magazine,” Trierweiler allegedly began, before slamming the “bullshit pictures”, and the publication itself for being “bullshit”.

Since her partner Françcois Hollande was elected, Trierweiler no longer works from the Paris Match offices, and so is not warned about what articles are due to appear in the magazine.

Trierweiler’s private secretary, Patrice Biancone, confirmed the first lady made a call to her boss, but denied that she used the language described by Le Canard Enchainé.

“She did protest, but in more courteous terms," Biancone said.

Sources at Paris Match, quoted in Le Canard Enchainé, said that Royant was “shocked” by the phone message, despite being accustomed to Trierweiler’s “eruptions” over the years.

The first lady caused a scandal last June when she tweeted a message of support to an election opponent of Segolène Royal – François Hollande's ex-partner and mother of their four children.

Back in March 2012, in the run-up to the presidential elections, Trierweiler lashed out against Paris Match for making her its cover story.

"What a shock to find yourself on the front page of your own paper. I am angry to see the use of photos without my agreement and without letting me know," she tweeted.

The article had described Trierweiler as "charming", and devoted several pages to her relationship with the then Socialist Party leader, telling "the story of how their love was born".