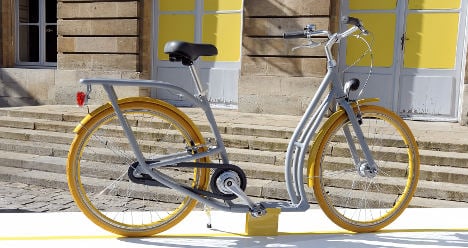 The 'Pibal', a new 'scooter-bike' conceived by French designer Phillipe Starck, at its launch in Bordeaux on February 19th. Photo: Jean Pierre Mueller/AFP

The ‘Pibal’, named after the regional nickname for a baby was officially launched this week by Starck, who was accompanied by the former French prime minister Alain Juppé, now the Mayor of Bordeaux.

The hybrid scooter-bike is a lightweight cycle, painted grey with bright yellow wheels.

"I hope it moves like a fish in water – with harmony,” said Starck, a world famous designer whose creations have ranged from toothbrushes to hotels, appliances, furniture and in 2012, a $300 million (€223 million) yacht.

“Making a high-quality product that’s lightweight, long-lasting, reliable, with automatic brakes and speed settings, and that won’t break down, all for a good price – that’s complicated," the designer said of his latest creation at Tuesday's unveiling.

Peugeot Cycles has agreed to construct a first wave of 300 pibals – at a cost of €420 each – by September, but no plans have yet been made to roll out the vehicle beyond Bordeaux, according to France's TF1 TV.

Ultimately, it’s hoped that the Pibal will replace the city’s fleet of 3,500 bicycles, which are currently free to use for Bordeaux residents and visitors.