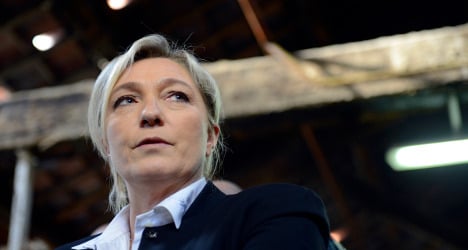 Protesters gathered outside to denounce the National Front leader, who spoke in French on what she claimed were the main political issues "in France, Europe and the world" in front of 300 members of the Cambridge Union Society.

"I have campaigned forcefully for Europe to halt immigration and the Schengen agreement and to prepare for a return to national currencies," she said, highlighting the need for a "strong state" in France, which she claimed had been weakened by the EU.

She urged "a new deal on immigration" and said that "the Soviet Union European (was) emerging slowly but surely."

Le Pen also pushed for "the end of the Francafrique" – referring to the dubious ties France has had with its former colonies – and added she hoped France would stop taking responsibility "for the misery of the world" because it did not have the resources.

She also warned that the twin "totalitarian" ideologies of "Islamism and globalism" threatened the existence of France and Britain in the 21st century, comparing them to communism and Nazism in the previous century.

Le Pen revealed she had "political relations with UKIP", the British anti-European Union party, but had "no contact with the BNP", Britain's far-right party.

The 35-minute speech was followed by an hour-long exchange of questions and answers with students, which concluded with applause.

Before that, Le Pen was greeted by angry protesters carrying placards reading "No platform for fascism" and "F for Fascism, N for Nazism, down with the National Front".

Banners were also deployed with messages including "Le Pen, never again" and "(Cambridge Student) Union, you like rapists and fascists" in protest at the invitations issued by the Cambridge Union Society.