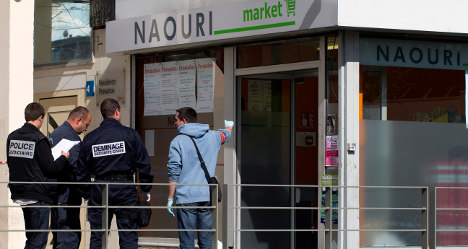 Police investigate the site of a bomb attack on a kosher supermarket in the Paris suburb of Sarcelles, on September 19th, 2012. Photo: Joel Saget/AFP

Anti-Semitic attacks have rocketed in France, according to a new report, which will no doubt increase anxiety among members of France's significant Jewish community.

According to the Protection Service for the Jewish Community (Service de protection de la communauté juive, SPCJ) there were 315 verbal or physical attacks against Jews in France last year compared to 171 in 2011.

The increase "degrades the image of France, as the land where minorities are protected", said Richard Prasquier, president of CRIF, the Representative Council of Jewish Institutions in France.

Elie Petit, vice presient of the Union of Jewish Students told The Local the Jewish community were increasingly concerned by these acts.

"This is not just stats, this is about victims who are being hurt and insulted in the street,"  Petit said on Wednesday. "Anti-Semitism in France is becoming more and more violent".

Overall there were 614 anti-Semitic acts, including the physical and verbal attacks, were recorded last year, representing a rise of 58 percent compared to 2011.

The most shocking anti-Semitic attack came in March 2012 when gunman Mohamed Merah shot dead three Jewish children and a rabbi outside their school in the south-western city of Toulouse. In October a grenade was thrown into a Jewish grocery store in the Paris suburb of Sarcelles in another apparent anti-Semitic attack. This time no one was hurt.

"The year 2012 was a year of unprecedented violence against Jewish people in France," the SPCJ said in its report, which will be handed in to Prime Minister Jean-Marc Ayrault on Wednesday.

What the SPCJ find most concerning is that Mohamed Merah's cold-blooded shooting of three children and a rabbi appears to have inspired others to commit anti-Semitic attacks.

The organisation reports that in the ten days following the Toulouse shooting 90 acts of anti-Semitism were reported, many of which were "committed with reference to supporting or identifying with Merah".

And after the grenade attack in Sarcelles, there were 28 acts of anti-Semitism reported in eight days including "many cases of bullets being fired at Jewish people," the SPCJ reported.

The 19th and 20th arrondisements of the French capital have witnessed repeated anti-Semitic attacks, the report says.

"In the past a rise in anti-Semitism in France has been linked to Israel Palestine conflict but not this time. This is unique to France. Yes there was a Merah effect but anti-Semitism was already here in France," Petit told The Local.

"When someone like Merah kills three Jewish children, you think anti-Semitism would be banished for good, but his acts have actually promoted it.

"We are asking the government to do more. We want it to declare the rise in anti-Semitism as a national concern so they can put more means into fighting it."

While anti-Semitic attacks have been on the increase in France so too has the number of Islamophobic incidents, with swastikas and other anti-Islam graffiti painted on mosques in recent weeks.

France's Muslim organisations are also calling on the government to do more to stop the rise in Islamophobic attacks.