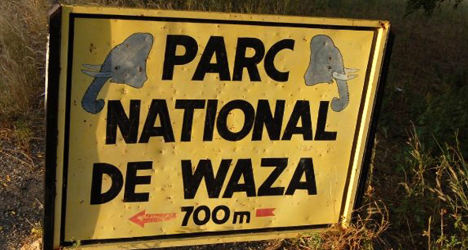 A sign showing the way to Parc National de Waza, close to where seven members of a French family were kidapped on Tuesday. Photo: Marc Preel/AFP

He was informed that the French national were seized by a Nigerian "terrorist group that we know well", Hollande told reporters while on a visit to Athens. "What is most probable is they will be taken to Nigeria," he said, adding France was doing everything possible to prevent that outcome.

According to reports in the French media the victims were a family of ex-pats living in the Cameroon capital Yaounde.

A source close to the French embassy in Yaounde had earlier said that unidentified men, apparently on motorbikes, had captured the seven tourists in the locality of Dabanga near the Nigeria border.

"Clearly the tourists were returning from the Waza natural park," the source said.

An anonymous source in the park said the family visited it on Monday. "They slept in the park's tourist camp where they left this morning," the source said.

A security source in the area told AFP that security forces were hunting for the kidnappers the length of the border with Nigeria.

Asked whether the kidnap could be a reprisal for France's military offensive against Al-Qaeda linked groups in northern Mali, Hollande spoke of Nigeria's Islamist Boko Haram group.

"I note in particular the presence of a terrorist group, namely Boko Haram, in that part of Cameroon, and that's worrying enough," he said.

A Cameroonian security source also told AFP: "We have strong suspicions regarding the Islamist sect Boko Haram", which is blamed for killing hundreds of people in an insurgency in northern Nigeria since 2009.

Earlier this year Nigerian extremists issued direct threats to France in retaliation for military action in Mali, with the French consulate warning its citizens against travel to northern Nigeria.

An advisory from the consulate said: "A growing situation of insecurity is resulting from the intervention undertaken in Mali against the advance of terrorist groups."

"In retaliation, Nigerian terrorist groups have issued direct threats against France and French citizens," it added.

It's the first time that Western tourists have been kidnapped in Cameroon, although hostage taking frequently occurs off the Cameroonian coast, the last incident taking place on February 8th.

The kidnapping of the seven French tourists on Tuesday brings to 15 the number of French hostages held abroad, all on African soil.

Among their number, at least six are held by Al-Qaeda in the Islamic Maghreb (AQIM) in the Sahel region, the semi-arid belt south of the Sahara desert that stretches across a swathe of western Africa.

In December, French engineer Francis Collomp was kidnapped in Nigeria in an act claimed by the Nigerian radical Islamist group Ansaru.