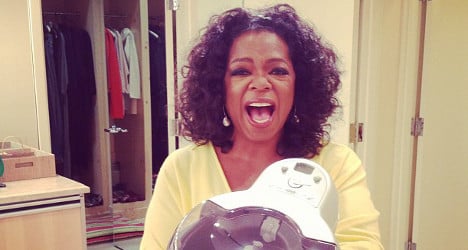 Seb stocks were up 4.05 percent to 62.42 euros in midday trading on the Paris stock exchange, hitting a six-month high.

Winfrey had Tweeted on Friday about using the company's T-Fal Actifry, a low-oil fryer which went on the market in the United States in 2011. The appliances are manufactured in the small town of Is-sur-TIlle in the Côte d'Or region of western France.

"This machine…T-Fal actifry has changed my life. And they're not paying me to say it," Winfrey wrote to her more than 16 million followers, posting a picture of herself holding the contraption.

She later posted a photograph of French fries made with the machine, saying they were "delicious with my veggie burger."

Winfrey is one of the most influential celebrities in the United States and her endorsement of a product can have a significant impact on its sales.

Seb's bosses will have been rubbing their hands in glee at the publicity coup as the stock market boost was estimated to have added €140 million euros on to the value of the company – the equivalent of the cost of 700,000 fryers.

Winfrey’s boost for the ailing French manufacturing sector provoked a fair amount of amusement in the French press.

Radio network RTL compared the image of the chat show host holding the appliance to the now infamous photo of the government’s minister for industrial recovery Arnaud Monetbourg, holding a blender dressed in a traditional ‘marinière’ Breton shirt.

The photo, which adorned the front cover of a magazine last year was designed to promote the French industry’s ‘Made in France’ campaign but led to some business leaders suggesting the minister was a 'sexy' pin up.