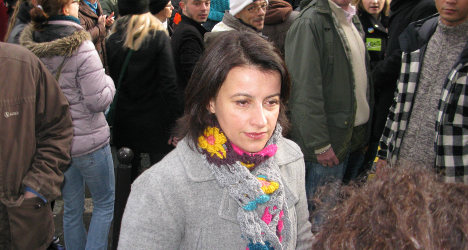 Housing Minister Cécile Duflot who could be a surprise candidate in an all female line up to become the next mayor of Paris. Photo: The Local

The current mayor Bertrand Delanoë will step down at the end of his second term in office next year and so far all the big names lined up to replace him are women.

It looks almost certain therefore that in 2014 Paris Town Hall will get its first ever female mayor.

The front runner is Delanoë’s current deputy Anne Hidalgo, 53, who looks set to be the official Socialist Party candidate. Delanoë himself has given Hidalgo his backing.

But behind her is Nathalie Kosciusko-Morizet, 39, better known in France as simply NKM. The former spokeswoman for Nicolas Sarkozy during last year’s failed presidential election campaign bid officially announced her candidature last week.

But NKM is not yet guaranteed the position as chosen candidate of the French right. She may be forced to fight it out for the chance to run against Hidalgo in a primary election against Rachida Dati, the mayor of Paris’s VII arrondissement.

Dati was once justice minister under Sarkozy before being unceremoniously dropped. She has been ever present in the headlines thanks in part to her much publicized paternity law suit to prove that Dominique Desseigne, a wealthy hotel group chief, is the father of her child.

And then there is the Greens’ Cécile Duflot, 37, the current housing minister, who has hinted she too may run for mayor in 2014. “I'm not ruling anything out,” she told French newspaper the Journal du Dimanche on Sunday on the question of whether she will run for mayor.

Marielle de Sarnez, vice-president of the centrist MoDem party could complete an all-female line up although there is still time for male candidates to throw their hats into the ring.

Next up, a female president?

Whoever comes out on top, having a female occupy one of the most prestigious posts in French politics, will give a significant boost to women in politics.

“The mayor of Paris has a lot of political clout, much more than London, so having a woman in that position will certainly help boost the presence of females in French politics,” Philippe Marlière, a professor in French politics at UCL London, told The Local on Monday.

“You can introduce all kinds of laws on equality but this kind of scenario will help much more.”

Marlière believes Delanoë’s choice to anoint Hidalgo as his would be successor made it impossible for the other parties to put up their “traditional male” candidates to oppose her.

If Paris elects its first female mayor it could also give a boost to the chances of a woman becoming president of the Republic for the first time.

Could Hidalgo or NKM follow in the footsteps of former mayor and president Jacques Chirac from the Paris Town Hall to the Elysée Palace.

“I think it’s definitely in the pipeline,” Marlière said. “I don’t think the French are ready to elect a president from an ethnic minority like an Obama figure but they’re much closer to having a female president.”