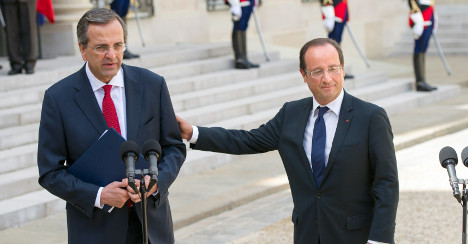 Hollande's trip is a "message of confidence and backing," his office said, adding that since he took power nine months ago the Socialist leader has championed the idea that Athens remain within the euro common currency zone.

Senior auditors from the European Union, the International Monetary Fund and the European Central Bank are returning to Greece later this month to gauge the progress of reforms.

Their report will determine whether Athens will have access to a scheduled slice of 2.8 billion euros from its international creditors due in February.

Greek Foreign Minister Dimitris Avramopoulos said the visit was a "strong gesture of understanding, solidarity and support for the Greek people.

"This visit encourages the pro-European forces in Greece who are struggling against the fierce opposition of certain interest groups representing the dysfunctions of the past and proposing the country's entrenchment and isolation from the European process," he told France's Le Figaro newspaper.

Greece's uneasy ruling coalition rests on the support of Socialist and moderate leftist parties who do not always see eye to eye with the conservatives of Prime Minister Antonis Samaras.

"Greece can be rescued only through a drastic improvement in its economic competitiveness," Avramopoulos said.

"We need to bear in mind that Greece lost 31 percent in terms of cost competitiveness between 2001 and 2009. This loss led to the problems that we are facing today.

"We have already been able to recover 75 percent of this loss through structural reforms. And we are just at the beginning," he said.

No similarity with Merkel's visit

A French diplomat said Hollande's visit would be of a completely different nature than the October trip of German Chancellor Angela Merkel, when 30,000 protestors gathered in downtown Athens with banners such as "Out with the Fourth Reich."

While Germany has contributed the most money to the Greek bailout, many Greeks hold Merkel responsible for demanding that Greece make swingeing cuts in exchange for the financing it has received.

Hollande meanwhile is seen to be more favourable toward the country for emphasising that austerity must be accompanied by measures that fuel sustained growth.

The French presidency said Greece "remained an important outlet for French companies," stressing that the majority of firms with units there had not closed operations since the crisis unfolded.

The visit aims at "concrete ideas to spur job creation, display our confidence and seek economic partnerships," it said.

A number of French countries have a significant presence in Greece, including Bic, which had one of its main shaver factories in the country as well as its main research and development centre.

During his visit, Hollande will meet Samaras, President Karolos Papoulias and the heads of about 40 leading companies.