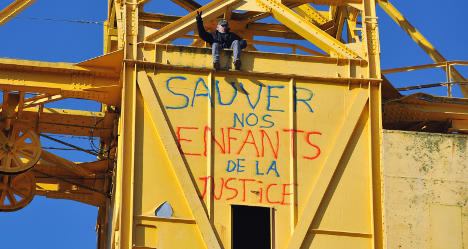 Aggrieved father Serge Charnay gestures from a 43-meter crane after spray painting the message " Save our children from the justice". Photo Frank Perry/AFP

A father denied access to his young son was perched atop a giant shipyard crane in the western French city of Nantes for a fourth day on Monday, vowing to stay put until a legal order was reversed.

Serge Charnay mounted the yellow crane on Friday amid morning fog to highlight his case, unfurling a large banner that read: "Benoit, two years without a dad."

Charnay has struggled to win back the right to see his son, born in 2006, after losing custody and all visiting rights when he was accused of kidnapping the boy.

"I will stay here until I gain something significant," Charnay said in a message. He has been sending text messages from his mobile phone.

He is seeking a reversal of the judicial order that he says "has destroyed my family and our lives."

The 42-year-old has been informed that his case will be reviewed on March 28. He has read the order but refused to come down.

"It's status quo," a police officer said. "There is nothing new. He is still on the crane."

SOS Papa want a law established that alternates a child's place of residence between the mother and the father in the case of couples splitting up.

Authorities were desperately trying to re-establish contact with Charnay, whose cellphone battery may have died, said Christian Galliard de Lavernee, the prefect of the area.

Charnay invited the media for an "event" on Sunday afternoon, saying he will not climb down.

He was offered food, water and medicine but has refused them, Patrick Lapouze, an official at the local prefecture said, adding: "He said he didn't want anything."

"I don't want that fathers have to go on a hunger strike to reclaim the right to see their children," he said in a statement, adding that he had not eaten or drunk anything since Saturday morning.

Charnay's friend Nicolas Moreno, also in a legal battle for the right to see his two sons Evan and Lucas, climbed a nearby crane on Saturday but came down after a few hours.

Another distressed father staged a copycat protest in the eastern city of Strasbourg but climbed down the crane after two hours following police intevention.

COVID-19
EU approves use of Pfizer-BioNTech vaccine in children 12 and over in Europe
Url copied to clipboard!