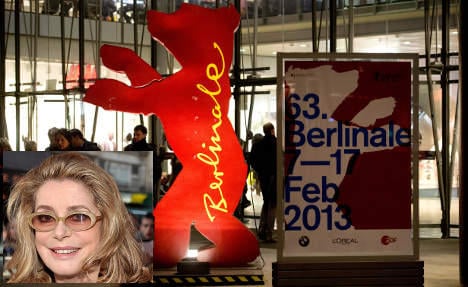 Deneuve plays Bettie, the owner of an ailing family restaurant in a small town in Brittany who, freshly dumped by her lover for a younger rival and driven to distraction by her elderly mother, pops out to buy cigarettes one day and just keeps driving.

"It's an impromptu journey and along the way all sorts of things happen. Bettie started asking new questions and getting new answers," Deneuve, 69, told reporters after a warmly received world première.

"Some people always attract trouble, there are people who kind of draw mischief. She's got her feet on the ground, she got a fairly healthy, pragmatic approach to life and she doesn't generally get it wrong when she trusts people."

The film is by Emmanuelle Bercot, one of three women directors in competition at the 63rd Berlinale, which will be awarding its Golden Bear top prize at a gala ceremony Saturday night.

The upbeat picture sees Bettie end up first at the French equivalent of a honky tonk bar, where a goofy but sweet younger man plies her with caipirinhas and beds her, telling her the next morning, "I bet you were a knock-out when you were young."

Bettie climbs back behind the wheel when her estranged adult daughter calls and asks her to pick up her son and take him to his grandfather's house because she has a job interview.

They hit the road together, and the boy warms to Bettie's down-to-earth sassiness.

When she runs out of cash, she realises her only option is to take the boy to a seaside hotel which has invited the 1969 beauty queens of France's various regions to a reunion photo shoot — an offer she had initially turned down.

In a performance with little vanity and long on humour about middle age, Deneuve looks at the pictures of herself in her prime with a wry smile.

And when the boy's attractive grandfather finally arrives to pick him up, the fact that the final plot twists are predictable did not dampen the fun for the Berlinale audience.

"It's not easy for a woman to get older, and it's not easy if that woman is an actor," Deneuve said.

"That doesn't mean you need to get obsessed about it. If there's nothing you can do about it, you might as well learn to live with it." She said she was drawn to the chance to work with Bercot, herself an actress by training, as well as the "optimistic" story.

"There are retirement homes where people fall madly in love and get married aged 70, 75 or older, it happens all the time," she said, adding that her character was "definitely not a diva".

Bercot, 45, said she wrote the film's screenplay with Deneuve in mind.

"She is just herself in the film, someone who is very easy-going," she told AFP, noting that that simplicity may be far from the image most cinema-goers have of the cinema legend. "I like her enormously as an actress and a woman. She is very inspiring."

Films featuring seasoned actresses in starring roles have made a big splash at this year's Berlin festival and are widely expected to take home prizes.

Audiences swooned over Chile's "Gloria" starring Paulina Garcia, until now known mainly for television roles, as a divorcee pushing 60 who is determined to seek happiness despite the knocks life has to offer.

Another fierce performance, this time with a darker tinge, came in the Romanian drama "Child's Pose" by Calin Peter Netzer, about a wealthy and controlling mother who fights to get her son acquitted after he kills a poor teenager with his car.