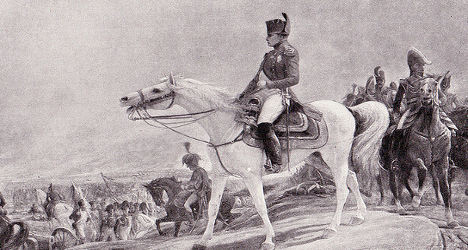 'Napolean on the field of Waterloo' from the painting by L Royer. An engagement ring he bought his wife Josephine will be go under the hammer. Photo: perpetualplum/flickr

The gold ring is topped by two pear-shaped stones and is estimated to fetch up to 12,000 euros ($16,000) at the March 24 auction in Fontainebleau, south of Paris.

"At the time, Napoleon had very little money. The ring is a very ordinary one," Jean-Christophe Chataignier, who head Osenat's department of historical objects, told AFP.

The marriage was not well received by Napoleon's family who were shocked he had married an older widow with two children. Two days after the wedding Napoleon left to lead the French army in Italy.

The couple divorced in 1810 due to Josephine's inability to bear Napoleon a child.

Despite numerous affairs, remarriage and then exile, Napoleon never forgot her and his last words, according to those near him on his death bed, were: "France. The army. The head of the army. Josephine."