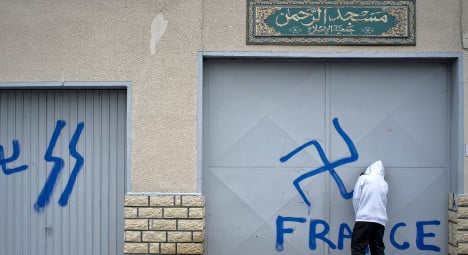 A worshipper at a mosque in Lyon finds a swastika painted on the door. Similar Islamophobic graffiti attacks have been carrie out across France recently. Photo: Jean-Philippe Ksiazek/AFP

A recent spate of anti-Islam graffiti attacks against mosques in France, combined with the publication of surveys suggesting a majority of French people believe Islam is not compatible with French society, has raised questions over the level of Islamophobia in France.

This week The Local reported that swastikas had been daubed on a mosque in the town of Provins, outside Paris. This was just the latest in a series of graffiti attacks targeting Muslim places of worship in recent weeks. Muslim groups have said that members of the community are living in fear, and claim statistics show Islamophobic attacks are on the increase.

For this week’s Tête-à-tête, The Local has asked two experts to offer their views on the scale of Islamophobia in France.

Firstly, Sami Debah, president of the Collective Against Islamophobia in France (CCIF):

“We are seriously worried about the situation we have in France. When you see the results of surveys where 74 percent of people think that Islam is not compatible with French society, this view is reflected in acts of Islamophobia on the street, which rose by 38 percent between 2011 and 2012. That is an enormous jump. Symbols of Islam are being attacked. What’s worse is that there is a now an institutionalized Islamophobia. It is almost becoming legitimate.

“The situation in France is more worrying than in other countries for two reasons. Firstly, the country's principle of secularism, which is so important in France, is hostile towards religion. It provokes a negative reaction towards religion. The other reason is France’s history with predominantly Muslim countries, which has helped prolong feelings of Islamophobia.

“It's concerning to see views in France in 2013 that are the same as those that were held in the Middle Ages, when there were no human rights. It’s really worrying. We blame political dialogue in the country. This problem comes not just from the far right, but from all parties, left and right. Islamophobia has become trivialized.

“We thought that with a new government there would be an end to all the hateful political dialogue, and things would change but they haven't.  We thought we would turn a page and be at peace but that hasn't happened.”

Philippe Schmidt is the president of The International League against Racism and Anti-Semitism (LICRA):

“The question of Islamophobia in France is a complicated one. For a start, what is Islamophobia? I don’t like the word. I think it's a mistake to refer to Islamophobia. The term was invented by extremists. The issues we are talking about are linked to racism. But if we take the word as it is then yes it is obvious that it is there. When you have extremist Muslims then people will always react against that, although of course I do not believe they are right to do it.

“Of course there are some people in France who are racist, but the problem is these people are reacting to extremist Muslims, who unfortunately are the Muslims we hear about most. They're at the forefront and get the most publicity. Naturally, if this particular image of Islam prevails, most French people will say it's not compatible with French values.

But the extremism they see on television is not Islam.

“There is racism and discrimination in France, which we have been fighting against for many years. I'm sure it would be more difficult for a young man with a name like Mohammed to get a job as a lawyer than, say, Philippe Schmidt. There’s no doubt about that.

“There are a lot of difficulties in France, without a doubt. But is it the world's worst country when it comes to racism? I don’t think so. It’s difficult to compare, but look at all the problems in the US, for example.

“France is more complicated, because we have a huge Muslim population, a huge black population, as well as a significant Jewish population. In countries with smaller minorities things are generally easier.”