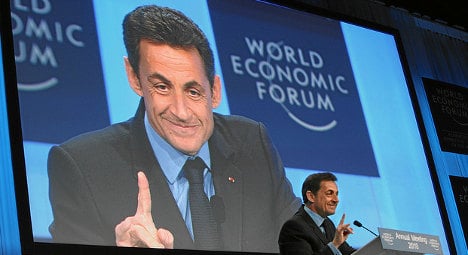 The rumours have been around for a while now but more and more voices are joining the growing chorus of people predicting the return to politics of former president Nicolas Sarkozy.

The latest to predict the return of Sarkozy is one of his strongest allies in French politics, former prime minister Alain Juppé, who has openly touted the former president’s return as an opponent to François Hollande in the 2017 presidential election.

“I sense that he has a desire to put himself forward,” Juppé told France’s parliamentary TV channel LCP on Wednesday.

“He follows political news with a lot of care. I speak to him on the phone and I see that he’s staying watchful,” said Juppé.

It is not just Sarkozy's allies in the UMP party that are evoking a return of their former leader, apparently president François Hollande himself is expecting another showdown against his erstwhile right-wing rival.

“He’s convinced that Sarko wants his revenge, and will be his opponent [in the next presidential election],” a source close to the current head of state told French daily Le Parisien on Thursday.

An unnamed government minister was also able to see the logic in a ‘Sarkozy 2017’ campaign. Speaking to Le Parisien, the minister pointed out: “There’s a crisis of leadership on the right, and Sarko mobilized his electorate. He succeeded in bringing out the base.”

“And you want my opinion? He’s bored to death,” the minister added.

Meanwhile, the group "Friends of Nicolas Sarkozy", made up of his former allies, continues to meet up on a regular basis. The group, whose next rendezvous is next Wednesday in Paris, officially meet for the purpose of holding regular talks on Sarkozy's presidency, but unofficially it is believed they are plotting the former leader's path back into politics.

Along with his wife Carla Bruni, the former president has been racking up the air miles – and the speculation – since his defeat to then Socialist leader François Hollande in last May’s election.

First, there was a month-long holiday to Morocco, followed by a controversial stay in Canada while police raided Sarkozy’s Paris offices.

In December, Sarkozy, former leader of the centre-right UMP attempted to resolve the party’s leadership dispute between François Fillon and Jean-François Copé, confirming for many that he was still the main man among France conservatives.

Then on January 21st, The Local reported on claims that the former president was planning to start a near -€1 billion investment fund, and decamp to London to manage it.

Even Sarkozy’s wife, the Franco-Italian singer and actress Carla Bruni, has begun to mention the possibility of her husband’s return to political life, though her support for such a move seems in doubt.

“I have absolutely no desire for him to dive back in there. We are very happy in our new life,” she told French news website Atlantico on Tuesday.

However, she measured her comments by predicting a 2017 second-round presidential duel between François Hollande and far-right National Front leader Marine Le Pen.

“Yes, it’s true, Nicolas could avoid that dreadful face-off for France,” she added.

For her part, Bruni, who married Sarkozy in 2008, has been pursuing her music career again, after a four-year hiatus while she was France’s first lady.

Her new album, “Little French Songs”, is set to be released on April 1st, and will be followed by a tour in the autumn, according to AFP.