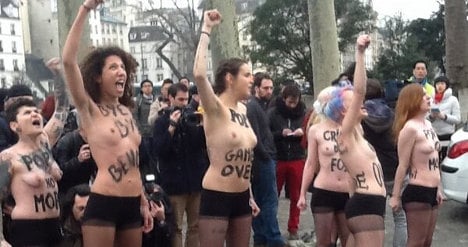 Two complaints against the group have been lodged with police in Paris, the cathedral’s rector Patrick Jacquin told Metro France.

On Tuesday members of the Femen movement entered the Gothic cathedral dressed in long coats which they whipped off inside while ringing three bells near the altar.

"Pope no more!" they cried. "No more homophobe" and "Bye bye Benedict!"

The protesters were dragged out of the cathedral by security guards but remained outside for some time shouting "In gay we trust" and "Get out homophobe."

Notre Dame has not taken their action lightly and filed complaints against the group for “desecration of a place of worship” and "desecration of sacred objects”.

“They mounted on the podium where three of our new bells were being displayed for the 850th anniversary of the cathedral,” Jacquin told Metro France. “They damaged the bell called Denis knocking off its gold leaf.”

The rector said the cathedral will be seeking compensation for the damage caused.

Another complaint was filed for assault after the guards who dragged the activists out of the cathedral were allegedly kicked by the women. One guard suffered a shoulder injury and a supervisor at the cathedral reportedly collapsed in the mayhem and had to receive first aid from paramedics.

“This unspeakable raid was incredibly violent and the children who were there at the time were left in shock,” Jacquin said.

The Femen women's power group has been making headlines since 2010 for topless feminist, pro-democracy and anti-corruption protests in Russia, Ukraine and London.

"It is absolutely ridiculous what they did," Lemessin told The Local.

Tuesday's bare-all protest is not the first time radical action by the feminist groups has provoked legal action.

Last year members of the group dressed up as nuns to try to sabotage an anti-gay marriage protest in Paris. The women ripped off their 'habits' to reveal comments scrawled on their naked chests such as "In gay we trust" and "Fuck the church".

Catholic group Civitas then sued the group for “sexual exhibitionism” in front of children, as well as protesting illegally and insulting a religious group by mocking their appearance.