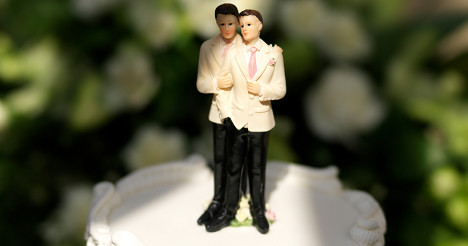 The Live blog has now closed but you can scroll down to find out what happened on this historic day in the French parliament or click here to read an updated article on today’s vote.

18:19 – The vote could have been very different today if all the deputies had made the same blunder Centrist leader Jean Louis Borloo made. Intending to vote for the bill, Borloo hit the wrong button on his voting pad and ended up voting against. He’d be useless on Who Wants to be a Millionaire.

18:00  – As AFP points out, a separate law on providing medically assisted conception to gay couples, already extended to heterosexual couples unable to conceive, will be debated later in the year.

17:57 – French daily Le Figaro seems to think the bill’s next obstacle in the Senate will be more trickier to get passed then many think. The Socialists as the article points out only have a majority of six in France’s upper house and it needs the support of the Communists, the greens and the radical left to get a bill passed. Le Figaro points out that some Socialist party senators, from France’s overseas territories my abstain from the vote. It is also not clear whether all the radical left MPs will vote in favour of the government. So those in favour should not celebrate just yet. This bill might still have a long way to go.

17:35 – What next for comic turned leader of the anti-gay marriage movement Frigide Barjot She’s an interesting character, of whom you can find out a lot more by clicking here. Presumably she won’t give up the fight although some out there are hoping this will be the end of her daily appearances on French TV.

Carlos Crespo tweets: “Two bits of good news – “Marriage for all” has been voted and soon we will see a lot less of the unbearable Frigide Barjot.

17:23 – Its important to remember that not all gay people were in favour of legalizing same sex marriage. One of those against the bill was Emmanuel Ducamp from the organisation Homovox. He told The Local they would have to respect parliament’s decision.

“We need to respect the decision of the people, made by the National Assembly. It does not mean we agree with the text of the bill. Now there is not much we can say. We will have to wait until it goes to the Senate and then the Constitutional Council to see if it becomes law. we have to admit it has been passed by parliament,” Ducamp said.

17:18 – More from twitter – “Just the satisfaction of being to watch this moment live”

17:15: By our reckoning France is on its way to becoming the 12th country to legalize same sex marriage after today’s vote in parliament.

We are so #happy! France votes finally FOR gay mariage! My friend is crying next to me. 🙂 #same #love

17:09 – Well that’s it folks, relatively painless in the end, given the two weeks of verbal wrangling that preceded it. The National Assembly has voted in favour of legalising gay marriage in France and opening up adoption to same sex couples. Its not quite finished though as its over to the Senate now.

Stay with us for all the reaction to this historic moment.

17:00 – A Tweet from Socialist deputy Sébastien Pietrasanta sums up the mood among supporters of the bill in the National Assembly today He said: “In a few minutes, I’m going to vote for marriage for all. One of the best votes I will have cast in favour of equality.”

17:00 – Its a proud moment for plenty of deputies (those in favour of course) as they are keen to remind everyone.Radical left MP  Alain Tourret reminds deputies of UK Prime Minister David Cameron’s words that ‘the country will be stronger by passing this law” (Cameron was obviously referring to the UK’s own gay marriage bill that passed last the House of Commons last week.

Referring to the UMP opposition this tweeter says:  “I suppose that, contrary to ancient practice, the public doesn’t have the right to throw rotten tomatoes?”

Does anybody has a link to purchase #DirectAN / #mariagepourtous on DVD ? I’d like to see the episodes I missed, I have popcorn leftovers…

16:47 – “This law will allow a concrete change to the lives of numerous families. Two opposing visions of society were seen during this debate,” said Corinne Narassiguin from the Socialist, Republican and Citizen SRC political group

16:40 – Mariton saying they wanted a referendum to let the French people decide this issue, but the government refused. Plenty of jeers for him.

16:35 – UMP opposition deputy Hervé Mariton is jeered as he begins speaking. “We love the words mother and father – you have tortured the french language”, he tells the Socialists.

16:30 – Justice Minister Christiane Taubira, who has emerged as one of the stars of the two week debate has just received a warm round of applause when her name was mentioned. Socialist Party spokesman Thierry Mandon said the vote is a “proud moment for equality”.

16:30 – OK it looks like we are underway. Several deputies will speak before the vote takes place.

16:20 – With the vote set to pass easily it might be interesting to see how the UMP opposition deputies are going to vote. Only two have come out in favour of the bill and Christian Jacob, the group’s leader in parliament believes 10 to 15 percent of his party’s MPs will abstain.

16:17 – If today’s vote is passed as expected it won’t mean the opponents of gay marriage will accept defeat just yet. Those who organised the mass “Manif pour Tous” (demo for all) in Paris last month have already pencilled in the date of March 24 for their next street protest. Protesters have also revealed they have gathered half a million signatures on a petition against the legislation.

16:09 – At times over the last few months the gay marriage row in France has descended into a slanging match with politicians, and, well anyone involved saying some pretty outrageous things. Here The Local gathered together ten of the most provocative comments on gay marriage.

16:05 – Today is of course not the end of the gay marriage discussion as once the vote has been carried out the bill will then head off to the Senate where another tug of war debate, which is set to start in late March or early April.

16:00 – Nicolas Gougain of the Inter-LGBT lobby group has hailed the importance of today’s vote: “This is a hugely important vote that will help push forward gay rights in France, ” Gougain told The Local.  “In the past this was not possible because the wish of those in power did not match that of society as a whole, but today that is the case. We salute and recognise the work of the politicians in pushing this law through parliament.”

15:00 – In a surprise development, several members of the right-wing UMP party of former president Nicolas Sarkozy said they could abstain, a move which would facilitate its adoption (AFP).