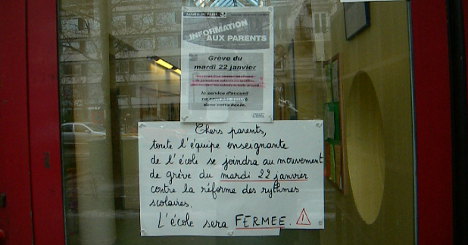 File photo of a school that remained closed in Paris last month as teachers protested over an extension to the working week. Photo: The Local.

Classrooms were closed across France, as teachers angry over government plans to open schools for an extra half a day a week, staged a nationwide walk out.

Unions claim 60 percent of teachers have taken part in the strike but the Ministry of Education says the figure is more like 36.8 percent.

Education minister Vincent Peillon has angered the teaching profession in France by proposing to extend the school timetable by half a day each week from September 2013.

Teachers are concerned the extra half day will simply add to their already overburdened workload and is being rushed through before members of staff can be recruited.

Currently in France primary schools are closed on Wednesdays but the socialist government wants children to start attending classes on Wednesday morning in the future for 'extra-curricular activities'. In return the length of the full teaching day will be slightly shortened.

“We need to inform the French people that one week of 4.5 days is better for learning than 4 days of more than five hours of classes,” the education minister told Le Parisien. “It will allow children to undertake more sporting and cultural activities.

In the capital, where 70 percent of teachers reportedly joined Tuesday's walk-out, 229 schools were closed today.  Another 570 schools, which were without 25 percent or more of their usual staff were operating on a "minimum service" according to French daily Le Parisien.

The minimum service , known as the SMA (service minimum d’acceuil) is a legal requirement by local authorities to hire substitute teachers or child-care professionals to cover  when 25 percent or more teachers are on strike.

The law, introduced in 2008, is intended to allow a bare minimum of certain public services – in education, public transport or healthcare.

However, some view SMA as a breach of France’s constitutional right to strike, and many mayors have refused to put in place a back-up plan.

“This law is scandalous,” said Pierre Bosino, communist mayor of Montataire in northern France. “If teachers go on strike, it’s to defend our children’s education, and everyone must be in solidarity,” he told Le Parisien.