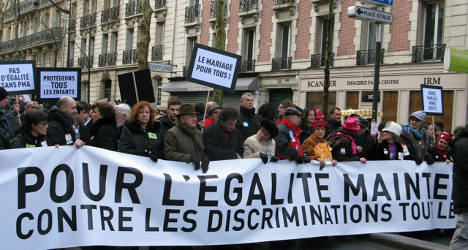 The historic ballot on whether to legalize gay marriage and open up adoption to same sex couples takes place on Tuesday at the end of two weeks of discussions that went on day and night.

The formal vote comes 10 days after lawmakers voted 249-97 in favour of its key article which redefines marriage as a contract between two people rather than between a man and a woman.

Although the debate was hard fought with deputies going toe to toe at times, the bill, which represents one of President François Hollande’s flagship election pledges, is set to be passed smoothly thanks to the majority held by France’s ruling Socialist Party.

The only question remaining after 110 hours of arguing is what will the final voting figures be. Opposition UMP party chiefs expect up to ten percent of their deputies to abstain. Other UMP representatives are expected to vote in favour of the bill.

After months of frenzied debate, the ease with which the law cleared its first major hurdle has been welcomed by gay rights activists.

"Things are going well and quickly, which is a relief for us," Nicolas Gougain of the Inter-LGBT lobby group had said. "We've never seen so many deputies arguing the case for equality and for the recognition of different kinds of families. We can now look forward to the remainder of the debate calmly. It's fabulous!"

Once the vote has taken place the bill will move to a new battleground at the French Senate, with the upper house due to begin its own debate on March 18th. With the Socialist party also having a majority in the Senate the bill is again expected to pass without too much trouble.

The issue proved as divisive inside the parliament as it did on the streets of Paris where rival protests, both for and against gay marriage, drew hundreds of thousands of marchers onto the streets.

Despite the bill making progress through the National Assembly opponents of the legislation, who have mobilized through the movement ‘Manif pour Tous’, have refused to accept defeat.

The collective announced on Monday that it had garnered half a million signatures for a petition against the proposed law. A protest has also been organised for March 24th.

Once the bill has been voted on in both houses the opposition has a right to send it to the country’s highest legal body, the Constitutional Council, as is the case with all new laws in France.

However the council’s head, Jean-Louis Debré, has already ruled out a censuring of the text of the law, saying it was up to parliament “to define the outline of marriage”.

With the bill set to come into law by early spring, the first gay marriages in France could take place by the middle of 2013.

Gay couples eager to tie the knot are lining up ready to exchange their marriage vows once they are given the right.

“As soon as the law is passed we are off to the Town Hall,” Cyril Isabello from Grenoble told Le Parisien.