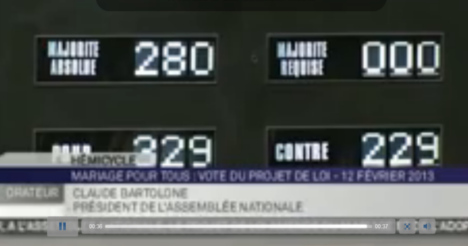 After ten days of occasionally fraught debate, and some very late nights, deputies in France’s lower house on Tuesday evening adopted the bill by 329 votes to 229, comfortably surpassing the 280 required majority.

The vote means that France is now on its way to becoming the world’s 12th country to legalize same-sex marriage.

Reaction has been swift on both sides of the debate. Nicolas Gougain of the Inter-LGBT lobby group hailed the importance of today's vote: "This is a hugely important vote that will help push forward gay rights in France," Gougain told The Local.

"In the past this was not possible because the wish of those in power did not match that of society as a whole, but today that is the case. We salute and recognise the work of the politicians in pushing this law through parliament."

The response among the general public has been mixed, but largely celebratory, as one Twitter user reflected.

We are so #happy! France votes finally FOR gay mariage! My friend is crying next to me. 🙂 #same #love

One gay opponent of the bill was philosophical in response to the historic vote.  Emmanuel Ducamp from the organization Homovox told The Local they would have to respect parliament's decision.

"We need to respect the decision of the people, made through the National Assembly. It does not mean we agree with the text of the bill. Now there is not much we can say. We will have to wait until it goes to the Senate and then the Constitutional Council to see if it becomes law. We have to admit that it has been passed by parliament," Ducamp said.

Indeed, the bill’s prospects in the French upper house are far from a foregone conclusions, as right-leaning French daily Le Figaro pointed out on Tuesday evening.

The Socialists have a majority of just six in the Senate, and will need the help of the Communists, greens and the radical left – some of whom may not be effusive in their support – to make the bill into law.

Those discussions are set to begin on March 18th.

'I'm proud to be alive at this moment.'

The National Assembly chamber, known as the ‘hemicycle’ because of its horseshoe design, witnessed a few emotional moments during speeches on Tuesday evening.

Centre-right UMP deputy Hervé Mariton was jeered as he began his remarks. "We love the words mother and father. You have tortured the French language", said Mariton.

“You are individualists and materialists. We are united and free,” he told the Socialist MPs.

Democratic and Republican Left MP Marie-George Buffet said: "This law allows France to start a new chapter. I'm proud to be alive at this moment."

Justice Minister Christiane Taubira, who has emerged as one of the stars of the two week debate, received a standing ovation at the commencement of her speech, and caused laughter on both sides of the chamber when she thanked all members “for your days, and for your nights” – a reference to some notably long sessions recently, where deputies pored over more than 5,000 amendments to the bill.

Before Tuesday evening’s long-awaited session, Socialist MP Sébastien Pietrasanta summed up the feelings of many gay marriage advocates with this tweet. "In a few minutes, I’m going to vote for marriage for all. One of the best votes I will have cast in favour of equality.”

In the end, though, the electronic voting in the chamber was over in a flash, and the announcement, by Socialist National Assembly Claude Bartolone, that the bill had surpassed the 280 votes required to be adopted, was greeted with rapturous applause.