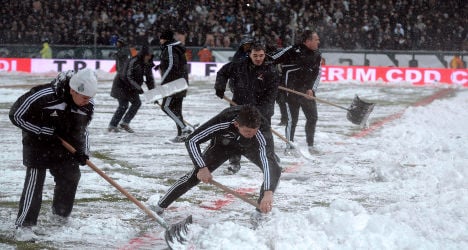 France’s national meteorological service Meteo France on Sunday placed a total of 41 departments on Orange alert – the second-highest warning level. The alerts which warn of snow and ice are expected to remain in place until late Monday evening.

The Pyrénées region has been one of the worst affect areas with emergency services decided to evacuate one village of 600 residents due to a severe threat of avalanches.

The inhabitants of Barèges, in the Hautes-Pyrénées department – most of whom are seasonal tourists – were taken to safe ground on Sunday afternoon, as reported in by L'Express. The Pyrénées has had almost record levels of snow fall this winter, which even caused the closure of one its ski resorts last week.

Airport authorities were also forced to cancel 20% of flights at Paris’ Roissy-Charles de Gaulle for Monday.

The south-eastern region is set to be worst affected, with snowfall of between 10 and 20 cm. Similarly, the southern region of Languedoc-Roussilon can expect between 5 and 10 cm of snow, along with black ice and stormy conditions along the coast.

Inhabitants of the French capital should be prepared for 1 to 3 cm of snow, with the precipitation “becoming more significant in late afternoon”, according to French daily Le Parisien.

In general, Meteo France has called for vigilance and warned residents of the 41 departments in question that the conditions expected could be “very disruptive to many economic activities.”

Elsewhere, three young people were killed in a traffic accident in the mountainous department of Hautes-Alpes on Sunday night.

The three victims, aged between 22 and 28 years, were killed instantly in a three-vehicle collision near the town of Gap.