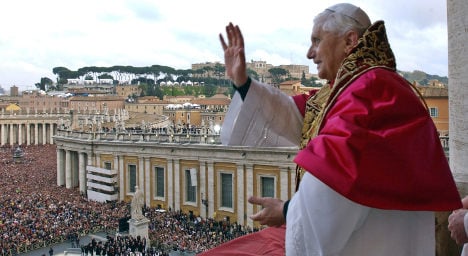 "After having repeatedly examined my conscience before God, I have come to the certainty that my strengths, due to an advanced age, are no longer suited to an adequate exercise of the Petrine ministry," Benedict said in a statement released by the Vatican.

"It is an eminently respectable decision," Hollande said. "It is a human decision and one that should be respected. The president said he did not want to comment further on "issues that belong to the church".

“He was given the ultimate mission, which he took one,” Bodvin told Europe1 radio. “He previously wrote in the book Light of the World that if one day he felt he could not continue this mission then he would take a decision.

“I bow to him with great respect. I will remember the image of a humble man with a humility as equally impressive as his intellect.

“He had extraordinary strength to take over from John Paul II and never tried to pretend to be like him.”

For his part, Cardinal André Vingt-Trois hailed what he called "a particularly courageous act." Speaking to France TV, the Archbishop of Paris said that Pope Benedict's decision "opened up a new phase in the history of the papacy," and was "admirable precisely because the pope is still very lucid."

Elsewhere, the president of France’s Christian Democratic Party (PCD) Christine Boutin said the pope's decision has come as a "shock".

"For Catholics, this is another surprise," she said. "But the church will go on. I do not know the underlying reasons to explain this decision by the Pope, but for us it seems to have a spiritual dimension.

"The Pope is moral authority for Catholics and a moral guide for the world," she told Europe 1.

On the question of what Pope Benedict might do next, the writer Christophe Dickès told French weekly Le Point, "I imagine he'll probably retire to a monastery. Or he might stay in Rome. One thing is sure, though, he'll keep working. He's an intellectual, and he'll remain one."

For more reaction on Pope Benedict's decision to step down click here.