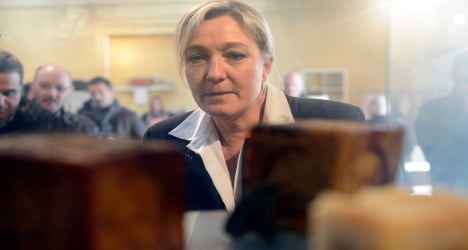 Marine Le Pen, leader of the far-right, anti-immigration party, who garnered 18 percent of the vote in last May's presidential elections, is turning her attention away from the Elysée palace and towards local battlegrounds across the country.

Her secret weapon for the 2014 local elections is the ‘Campus Bleu Marine’, which was unveiled last month at Nanterres, a suburb to the west of Paris.

The controversial leader, who campaigned to cut immigration by 90 percent and increase sovereignty for France,  is hoping success at a local level will help boost the party's influence and credibility in French politics.

In an open letter to party members, Le Pen called Campus Bleu Marine ‘the most important project for the future of the National Front.’

The campus opened its doors for the first "students" at the weekend, with seminars to be held each weekend until the summer. Party chiefs are hoping around 600 potential National Front candidates will have graduated by June.

The syllabus for Campus Bleu Marine touches on every aspect of modern political campaigning. According to the school’s director, Frédéric Gourier, the ‘students’ are learning public relations, communication, media training, campaign finance, legal perspectives, strategy and how to put together a ballot list.

“Go out and have a physical presence on the ground, and be active, even in small villages,” Michel Guiniot, a National Front manager told students, according to Europe 1 radio.

“Because that’s how you’re going to put together your list – by knocking on doors,” he said.

The seminars have reportedly attracted a diverse group of would-be candidates in recent weeks who will be able to attend lectures on topics such as "The National Front's strategy in towns with less than 9,000 inhabitants".

According to a report in French daily Le Parisien on Monday, one recent class featured participants aged between 19 and 71 years, including a law student and a middle-aged nursery-school teacher, as well as a 62-year-old former Socialist Party activist.

‘All I know is that I know nothing’

For the National Front’s newest recruits, many of whom are new to political activism, it all seems a lot to take in.

A sign at the door of the classroom contains Socrates’ famous maxim, “All I know is that I know nothing.” It’s a sentiment shared by 52-year-old Dominique Chalard.

“I have it all to learn, this is my first campaign,” she told Le Parisien. The assistant nursery school teacher is a former socialist, whose journey to Campus Bleu Marine began two years ago, when she joined a group of disaffected citizens in her hometown of Lempdes in central France.

Although the National Front has enjoyed significant levels of support among the French people at times, French election models mean that its number of elected representatives has never matched its level of popularity.

The party has only two National Assembly members (from a total of 577 seats), despite Le Pen's strong personal showing in the presidential elections.

A sign of the National Front's growing influence in France could be seen in a recent poll which indicated that one-third of French people agree with the party's ideas.

Indeed, 35 percent now believe that the party, founded by Jean-Marie Le Pen in 1972, “has the ability to participate in government”.

In 2002, Jean-Marie Le Pen qualified for the second round of the presidential election. French voters – horrified by the National Front policies of deporting non-Europeans, reintroducing the death penalty, and statements from Le Pen that appeared to minimize the Holocaust – overwhelmingly re-elected centre-right president Jacques Chirac by a record 82 to 18 percent.

Since taking over from her father as party leader in 2011, however, Marine Le Pen has attempted to project a friendlier, more moderate and less xenophobic public image for the National Front, a campaign the French media has taken to calling ‘de-diabolisation’ or ‘taking the devil out.’